What To Feed Bubble Tip Anemone? What Other People Are Feeding! 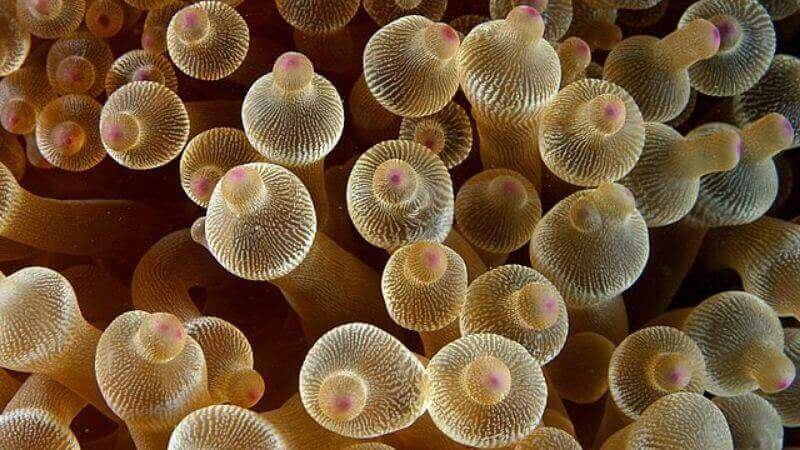 When I was a kid, I thought an anemone was a plant. Looking back at where I started, I have come a long way. Haha! My eyes were on stalks when I first found out anemones are, in fact, animals. So naturally, I was curious about how and what they eat?

What To Feed Bubble Tip Anemone?

Bubble tip anemones are carnivores that hunt and capture food using their sweeping tentacles in the wild. In the tank, they can eat silversides, shrimps, worms, mussels, krill, freshly chopped fish, and some frozen (and thawed) meaty treats.

When feeding, bubble tip anemones use nematocysts of tentacles to sting and capture prey. However, they obviously don’t have to resort to this hunting technique in captivity.

Daily nutrition also comes from symbiotic algae that reside within the anemone’s tissues and the water in a well-established tank.

And if you have clownfish present in the tank, your anemone will also consume waste produced by the fish since it contains some essential nutrients.

How Often Should You Feed Bubble Tip Anemone?

Bubble tip anemones can be fed a couple of times a week. Unlike fish, they don’t need to be fed multiple times a day. That’s because anemones can extract required nutrition from algae, fish waste, and water.

If the food is not finished even after an hour since you first offered it, you need to remove it diligently so the water quality doesn’t deteriorate.

And by the way, if your anemone is hosting a clownfish, you can cut down on the feeding frequency. The fish will routinely offer food to its host.

How Much Work Is A Saltwater Tank? Real Answers Only!

How To Feed Bubble Tip Anemone?

Once you’ve purchased raw or frozen food like clams, mussels, and shrimps, bring them to the same temperature as the tank water. Make sure you don’t offer seasoned seafood meant for human consumption.

Wash your hands thoroughly and ensure no traces of soap or moisturizer are present to not contaminate the food or the tank.

Next, cut the food into small pieces that can quickly go inside the anemone’s mouth/oral disc.

For smaller ones, cut the food into quarter-inch chunks. But larger anemones can easily gulp and digest big pieces too.

To feed, use tank tongs or a feeding stick. You can also use your hands, but you might get stung. But don’t worry – the sting is mild and poses no harm unless there’s an allergic reaction.

Now, gently place food on the anemone’s tentacles. They will readily grab the food and move it inside their mouths.

Make sure you don’t push the food at the anemone or into its mouth. It’s super fun to watch them grab the food and gobble it up.

Although bubble tip anemones are no picky eaters, if the food is something they don’t like or if they aren’t hungry, they’ll spit it right back. They often excrete it in a mucus-coated cocoon and hold onto it with their tentacles to eat later.

Below, I have pooled together a few answers shared by hobbyists on what and how often they feed their bubble tip anemones. I bet this is going to be helpful.

What To Feed Bubble Tip Anemone? And How Often? Real Answers Only!

“When I had bubble tip anemones, I just gave them brine shrimp every other day.”

“I give krill every other day.”

“I give my BTAs Rod’s food once or twice weekly, along with some occasional piece of shrimp.”

“My BTAs would get mysis shrimp from clowns, and then I would give it half of a silverside every so often.”

“Never did I feed mine directly. The clownfish would feed it when they’re too full though.”

“I fed mine silverslide and he loved it. Also heard it helps them split.”

“I do feed my tanks heavy – so they do get ded mysis, cyclops and whatever blows into them indirectly.”

“I give my BTAs brine shrimp and a big piece of shrimp once every 3 days.”

“My clowns would feed them. I would also give whole silversides. It’s so awesome to watch them pull a whole fish in. But I only did that about once a month though.”

“I’m not too sure about you guys but I would never put silversides in my reef tank. Those are nasty, oily, stinky nitrate bombs.”

“Every other day, I feed just one krill. But they also get some indirect feeding.”

“I give mine once a week some shrimps or silverslides. I haven’t run into any issues in 2 years.”

I’d recommend against feeding anemones every day. Anemones can get nutrients from algae, water, and fish waste. Therefore, there’s no need to feed every day.

Feeding just a few times a week will do. But I know several hobbyists who offer food every other day!

Truth be told, there’s no rule etched in stone. The feeding frequency is subject to factors like the anemone’s health, size, and environment.

How To Feed Anemone Frozen Shrimp?

Frozen shrimps should be first thawed and brought to the same temperature as the tank’s water. Then cut the shrimps into small pieces that can fit inside an anemone’s mouth and place them on its tentacles.

If the anemone is hungry, it’ll waste no time putting it inside its mouth. Otherwise, it will just hold it for some time and eat it later.

Yes, it’s perfectly safe and healthy to give anemones Reef Roids. In fact, that’s what I would recommend for smaller or sick anemones. It’s a blend of naturally occurring marine plankton.

Put some Reef Roid and tank water in a container to create a paste with a thick consistency. Next, using a dropper, dispense the paste into the anemone’s mouth.

There’s no way to tell how often a bubble tip anemone will split. While some reported that their anemone split at least once a year, another hobbyist shared that his anemone split 3 times in 5 years.

But your anemone splitting is not necessarily a good thing. It often happens due to stress.

Some hobbyists tend to overfeed their anemones to force a split. But that can be detrimental to their health and longevity. So, I’d suggest refraining from this practice.

You can give them both frozen and fresh treats like shrimps, worms, krill, mussels, silversides, and freshly chopped fish.

As for the answers to how much and how often to feed, there’s no one cardinal rule. You can see in the comments above that it all boils down to your preference and convenience.

But I’d recommend feeding them 2-3 times a week.

Your One-Stop Guide To Acan Coral

Your One-Stop Guide To Elegance Coral

Clownfish Tankmates | What Fish Can Live With Clownfish?