What To Feed Wild Turtles? Do They Practice Cannibalism? 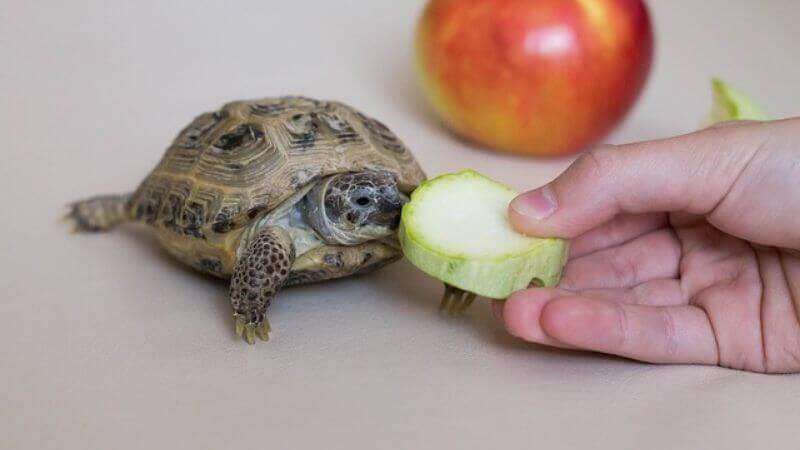 Due to the growing popularity of keeping turtles as pets, the number of people releasing them into the wild has increased, too.

Turtles have now been released in such high numbers that they have become a threat to local wildlife – thus, categorized as invasive species.

So, people living near the water bodies are bound to encounter wild turtles often (at least I do). Therefore, thoughts like how wild turtles live, what they eat, etc., might cross your mind.

These generous feelings might compel you to feed these turtles. However, you should first know what foods are safe and what aren’t.

In this article, I will list both safe and unsafe food for wild turtles.

What To Feed Wild Turtles?

Though turtles aren’t picky eaters, you should still try to provide them with food that mimics their natural diet in the wild.

Here is the list of food that you can feed wild turtles:

Worms are the routine food that is loved by turtles. They will eat any kind of worm they can sink their claw on.

Here’s a list of some worms safe to feed wild turtles.

Make sure you provide them in a moderate amount.

Before feeding plants to turtles, you should know which ones are safe for them. Commonly found plants safe for turtles include java fern, moss, duckweed, and waterweed.

So, Which Plants Are Unsafe For Wild Turtles To Eat?

Compared to captive turtles, wild ones have a better idea of which plants are safe for them or not. Plants you should avoid feeding wild turtles are boxwood, yew, hyacinth, rhododendrons, azaleas, milkweed, water hemlock, etc.

Some of these bacteria can transmit from one turtle to another, endangering the whole local turtle population.

Furthermore, you shouldn’t feed seasoned meat to wild turtles. Their digestive system isn’t built like ours. So, the seasonings we put in our meat are alien and harmful for them.

After the meat is cooked, chop it into tiny pieces before feeding. Turtles swallow their food whole, so cutting them into small portions prevents choking.

Turtles eat all sorts of insects in the wild. So, you can feed them grasshoppers, crickets, mosquitoes, ladybugs, ants, caterpillars, etc.

However, you should know that some insects aren’t safe for turtles to consume. For example, lightning bugs (fireflies) have toxins harmful to turtles.

In addition to insects, you can also feed larvae to wild turtles. Larvae have high protein content, an essential nutrient for turtles.

Suggested: Can Turtles Eat Flies? Feed These Insects Instead!

Babies and juvenile turtles need a protein-infilled diet. Thus, they lean towards a carnivorous diet at this stage.

But as they grow older, they prefer a vegetarian diet (not wholly). So, you know how important veggies are for wild turtles.

But veggies contain high amounts of oxalates, which prevents a turtle’s body from absorbing calcium.

Contrary to vegetables, fruits should only be fed occasionally and in moderate amounts. It shouldn’t comprise over 10% of a turtle’s diet.

Fruits have a high amount of nutrients, especially vitamin C. However, this is not the most critical nutrient for a turtle. Two of the most essential vitamins they need are vitamin A and D.

Additionally, fruits have high sugar content, drastically increasing a turtle’s glucose level. This can result in a sugar rush and fainting. Worst-case scenario, if a turtle faints in the water, it could very well drown.

So, What Do Turtles Eat In The Wild?

Turtles eat aquatic insects, larvae, plants, mollusks, crustaceans, and worms in the wild. They are omnivores and consume a wide variety of food.

Some larger freshwater species, like the snapping turtles, can consume small mammals, birds, and even members of their own species.

Is It True That They Eat Their Own Species?

Though it is not the most sustainable way to fill their appetite, turtles can eat their own species when hungry or if smaller turtles encroach their territory.

HERE’s An in-depth article on turtles and cannibalism.

Suggested: Do Turtles Eat Other Turtles? Are Turtles Cannibals?

Do Not Get Too Close

Do not get too close to wild turtles, especially on land. They feel vulnerable on the ground and may attack you.

Also, beware of snapping turtles and their infamous bite.

You shouldn’t overfeed wild turtles. Often the treats we provide them can prove fatal when given in abundance.

Also, they will increase their dependency on the food we give, resulting in them chasing humans for food.

I have seen wild turtles begging for food due to this exact reason.

Always keep your distance from wild turtles. Do not handle them as they carry salmonella, which can quickly transmit to humans.

Know What’s Safe And What Is Not

Before giving any kind of food to wild turtles, you should know whether it is safe or not. Do not give them dairy products, nuts, and raw meat.

Which Foods Are Not Safe For Wild Turtles?

Do not give wild turtles raw meat, dairy products, and nuts. Also, avoid vegetables that are high in oxalates.

Raw meat carries several bacteria, which can make a turtle ill. Also, do not add seasonings to the cooked meat or any other food you give.

Nuts contain a high amount of oxalates, preventing the turtle’s body from absorbing necessary calcium. Therefore, only feed nuts as an occasional treat.

Leafy veggies like spinach have high amounts of oxalate. I wouldn’t advise you to avoid them altogether, but feed these foods in moderate amounts.

Canned food with added preservatives should be a big no when feeding wild turtles. They are not only bad for wild turtles but also for your homebred pets.

Leaves of rhubarb, potatoes, tomatoes, and plants that have vines shouldn’t be fed to wild turtles. The stem and leaves of these plants have toxins that are harmful to turtles.

Can You Feed Commercial Food To Wild Turtles?

No, you shouldn’t feed commercial food to wild turtles. Their digestive system isn’t adept at digesting commercial and canned food.

Can You Feed Bread To Wild Turtles?

Yes, you can feed bread to wild turtles, but they do not have the nutrition necessary for turtles. And do not provide them commercial bread as they have added preservatives that turtles cannot digest.

Can You Feed Tomato To Wild Turtles?

Tomatoes have high sugar content, so give them only in moderate amounts. However, stems and leaves should be avoided.

Can You Feed Strawberries To Wild Turtles?

Feed strawberries to wild turtles but only in moderate amounts. Strawberries have vitamin C and manganese, which aren’t necessary nutrients for turtles.

Can You Feed Chicken To Wild Turtles?

Yes, you can feed cooked chicken to wild turtles. However, you should chop them into tiny pieces to prevent choking. Also, do not feed them meat with seasonings.

Can You Feed Blueberries To Wild Turtles?

A turtle’s digestive system isn’t compatible with blueberries. So, feed them occasionally to prevent a sugar spike and acidic reaction.

Can You Feed Broccoli To Wild Turtles?

As broccoli have goitrogens, compounds known to disrupt thyroid functions in reptiles, you can only feed them once in a while.

We all melt down when we see wild turtles begging for food.

However, a kind gesture of feeding on your side can have dire consequences not just for that particular turtle but the entire wild turtle population in the region.

So, you should carefully analyze the type of food you are about to give them.

We hope this guide will be helpful for you to decide.