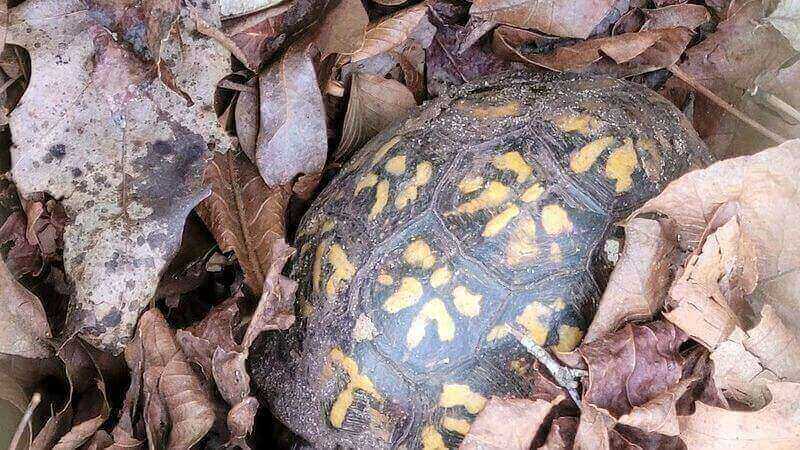 Turtles are ectotherms that rely on external heat for warmth. Therefore, if their habitat is just 1 degree Fahrenheit hot, so will their body temperature.

So, to survive the cold and generate heat, they go into hibernation. This allows them to slow down their metabolism and use significantly less energy to keep kicking.

If you are a turtle owner and notice your pet sleeping for days during winter, he is probably hibernating.

And if you are wondering when he will come out of hibernation, let me tell you.

When Do Turtles Come Out Of Hibernation?

Most turtles come out of hibernation during March and April. Factors like species, location, habitat, and season also determine the length of hibernation.

As I said, the time turtles come out of their hibernation depends very much on the species. So, let’s have a look!

When Do Red-Eared Sliders Come Out Of Hibernation?

In the wild, red-eared sliders hibernate around October and come out during March when the spring’s near.

On the other hand, Captive red-eared sliders hibernate at the onset of November and come out as early as March.

When Do Painted Turtles Come Out Of Hibernation?

Painted turtles living in the northern regions hibernate under the frozen water for about 100 days. They hibernate in October and come out in March.

However, it is found that the southern painted turtles do not hibernate at all.

If you are raising captive painted turtles, you need to adopt some tips before giving them the hibernation pass.

Here’s an article to help your painted turtles hibernate in captivity.

When Do Mud Turtles Come Out Of Hibernation?

Mud turtles go under shallow shoals and cover their bodies with mud and sand during hibernation.

When Do Box Turtles Come Out Of Hibernation?

Box turtles can stay buried for over 160 days during hibernation. They will hibernate in November and come out in May. Female box turtles go into hibernation earlier than males.

They will dig about 16 to 20 centimeters deep below the ground. An interesting study by a turtle volunteer Tim O’Brien revealed that box turtles came out of hibernation when the soil temperature reached about 57 degrees Fahrenheit.

You can check out his article here.

Box turtles from the southeastern US, like Florida box turtles and Gulf coast box turtles, are rarely found hibernating.

Also, if you have been keeping captive box turtles, they too might not hibernate indoors.

When Do Snapping Turtles Come Out Of Hibernation?

Snapping turtles withstand the harshest of winters. They will usually hibernate in October and come out after 4 to 6 months (February to April).

They cover their body in muddy water when hibernating.

Some snapping turtles are also found to be active during winter. They will swim below the ice in the frozen lakes and respire through their cloaca.

Head over here to find out more about this exciting breathing technique and some more.

What To Do If A Turtle Lays Eggs In Your Yard? What Happens If They Hatch?

Do Wild Turtles Hibernate For Longer Duration Than Captive Turtles?

It isn’t empirical, but captive turtles have a suitable environment because of heaters and artificial UV sources. Thus, they hibernate for a shorter period than wild turtles.

However, it depends upon the species too.

Should I Wake My Turtle From Hibernation?

If you notice urine or feces in his hibernaculum (burrow where he hibernates), it means that your turtle is partially awake. Therefore, this will be an appropriate time to wake your turtle up.

Also, if it has already been over 120 days, you can wake your turtle.

How To Wake Up A Hibernating Turtle?

It is essential to wake up a hibernating turtle after 120 days. After such an extended period, your turtle will not have enough energy in his reserve to continue hibernating.

Therefore, you should wake your turtle up to provide him with food to supplement his energy levels.

Here’s how you wake up a hibernating turtle:

Do Turtles Lose Weight During Hibernation?

Yes, it is normal for turtles to lose weight during hibernation. Here’s a quick reference:

If your turtle is losing more weight than the aforementioned, consult a vet.

How Do Turtles Breathe During Hibernation?

They breathe through their cloaca, an opening in the turtle’s rear end, which has a high density of blood vessels. The cloaca contracts and expands to intake oxygen from the moving water.

Final Words: When Do Turtles Come Out Of Hibernation?

Not every turtle goes in and comes out of hibernation at the same time. Turtles usually go into hibernation when the temperature around them gets too cold.

They can sense it when the mercury drops and start fasting to lower their metabolism.

Turtles in captivity might not hibernate if the temperature in their enclosure is optimal. But despite that, captive turtles can still go into hibernation.

One cannot be sure whether a pet turtle with all the creature comforts will still go into hibernation or not. I guess it all depends upon their mood.