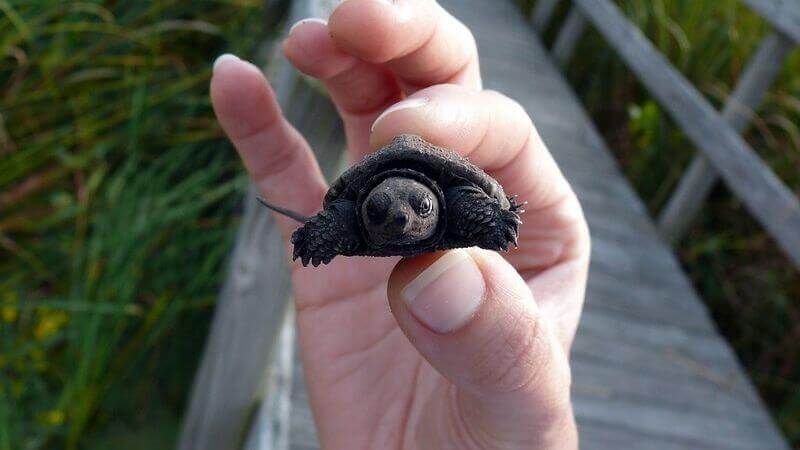 That is why releasing snapping turtles is illegal in many states. So, if your snapping turtle just gave birth, it might be tricky to find a suitable home for the hatchlings.

Where To Release Baby Snapping Turtles?

You can release baby snapping turtles in freshwater, ponds, streams ( with slow currents), and lakes. Release them in shallow waters because they aren’t skilled swimmers.

They like to dwell in murky waters, so releasing them in marshes and canals will be better.

However, releasing baby snapping turtles is illegal in many states. So, get a natural distribution map, and check if your state is listed.

If your state is mentioned, you can release them; otherwise, it is illegal.

Contact local animal services and ask for suggestions for a release site. Since they are an invasive species, you will endanger other turtles and the ecosystem itself by releasing them haphazardly.

For example, captive turtles can transmit diseases to the local population they aren’t accustomed to. So, it is not allowed to release baby snapping turtles in most states.

Here’s a link to a page that lists turtle rescue centers dotted across the US. Call up ones in your state and ask if they’re willing to adopt your baby snapping turtles!

3 Things You Should Know Before Releasing Baby Snapping Turtles

Let me tell you how to identify the snapping turtle you’ve got.

If the carapace (top shell) is smooth, round, and doesn’t have scutes, it is a common snapping turtle. An alligator snapping turtle, on the other hand, has three distinctive ridges.

The alligator snapping turtle will sit under muddy water and wriggle its worm-like organ to lure and trap its prey.

This is a distinct feature found only in alligator snapping turtles.

There’s a reason I emphasized profiling these snapping turtles. Let me explain.

Release Them When The Time Is Right

You shouldn’t release baby snapping turtles during the onset of winter. Instead, release them in the spring or autumn to get them habituated with new habitat and find a place where they can bask before the cold season arrives.

However, please do not wait too long to release them. Releasing an adult turtle will be hard on the turtle itself. It will be difficult for him to get acquainted with his natural surroundings.

Feed Them The Right Way

You need to be careful while feeding baby snapping turtles. You are not only taking care of these turtles, but also making them ready for their survival in the wild. So, provide them with live fish, live insects, and worms, live crustaceans, etc. This will help them hunt better and find their own food in the wild.

So, if you are about to release common snapping turtles, try feeding them pond plants. You can feed them algae, yellow pond lily, common duckweed, water fern, etc.

It will be even better if you bring them plants from where you are about to release them. This will help them get accustomed to the food before releasing it.

Do not give food from your hands. It is better not to let them know you are the one providing them with food.

Once they associate you with food – they will go to other people and beg for food, even in the wild.

What To Do If A Turtle Lays Eggs In Your Yard? What Happens If They Hatch?

What To Do If Releasing Snapping Turtles Is Prohibited In My State?

To be honest, there’s not much you can do except call the animal center and ask them to take it. If it is a common snapping turtle, they will probably euthanize it. Unfortunately, there are thousands of pet owners who call animal centers to get rid of their pets.

And if your state laws allow you to release baby snapping turtles, you can free them into shallow streams, marshes, rivers with slow currents, ponds, and lakes.

You shouldn’t prolong the releasing duration of baby snapping turtles because it will make it hard for the hatchlings to adapt to the new environment.

Releasing baby common snapping turtles has been illegal in most states because of their uncontrollable invasion, whereas alligator snapping turtles are enlisted as endangered animals by the IUCN.

So, get acquainted with the laws regarding the release of baby snapping turtles before giving them liberty.