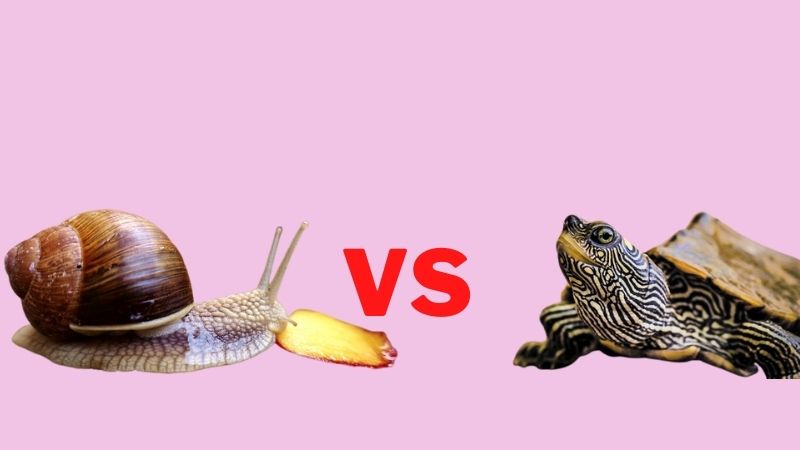 As someone who has raised both turtles and snails, I know a thing or two about these slow-moving creatures. Known for their plodding speed, they are the most unhurried animals to ever grace this planet.

And just like me, are you also curious to know which one of them is slower?

Which Is Slower – A Turtle Or A Snail?

Garden snails can move at a speed of 0.029 miles per hour, whereas turtles, on average, can cover 0.17 miles per hour. So despite comparing their pace in decimals, turtles are still miles ahead of a snail, making them clear victors.

Technically we cannot call the movement of a snail in the water swimming. Instead, aquatic snails stay afloat, waiting for water current to transport them to a better pasture.

This is why snails are even slower in water than on land. On average, a snail will cover 0.0044 miles by floating in an hour.

Having said that, some marine species like the sea hare snails have appendages on their “foot” that help them create a swimming motion.

On the other hand, turtles are agile swimmers and are 4 times faster in water than on land. This is even truer for sea turtles, who are known to drift with sea currents and travel even faster.

The officials from San Diego Zoo claimed that a turtle at their zoo covered 22 miles an hour!

Read This: Why Are Turtles Slow?

A snail floating can make it seem like they are swimming, but in reality, they cannot. Unlike a turtle’s shell, a snail’s shell isn’t hydrodynamic. So technically, snails cannot swim.

However, there are a few exceptions, like the sea hare snails. They have fin-like growth on their feet, helping them swim nominal distances.

Also, they do not have shells. Therefore, it is safe to assume they have abandoned their shell for better flexibility.

Yes, turtles can swim. In fact, all turtles can. Even the terrestrial ones can paddle their way to the shore if they accidentally fall into the water.

How Fast Can Snails Move?

A rough estimate would be 0.03 miles per hour. Unfortunately, snails need to invest about 40% energy in producing slimes, making it hard for them to cover a significant distance.

How Fast Can Turtles Move?

Despite having a home to carry around, turtles are pretty fast and can run at a rate of 3 to 4 miles an hour. But they only run when they have to run for their lives.

Turtle Vs. Snail: Size And Weight

Size is another factor that you should consider when comparing the speed of these two slothful animals on the planet.

The largest snail species, Syrinx aruanus, can reach up to 35 inches in length and weigh about 40 lbs with shell.

Whereas leatherback turtles, the largest species in the turtle family, can reach up to 6.56 feet long and weigh about 1322 pounds.

And when we talk about the average size of both species, the snails can only grow up to a couple of inches, whereas most turtles reach about 10 to 12 inches long.

So, despite having more bodyweight, turtles are definitely faster.

Turtle Vs. Snail: How Much Distance Can They Cover In A Day If They Are On Land?

Although snails aren’t known for operating/foraging in a larger radius, we can get a tentative estimate based on their walking speed.

For example, garden snails can clock about 0.03 miles per hour on average. If you do the math, they will cover approximately 0.36 miles in 12 hours (if they do not stop for drinks). Definitely, they aren’t much of a runner.

Turtles, especially the terrestrial ones, on the other hand, can cover about 3 miles in an hour. And if we assume that they travel non-stop for 12 hours, they will have traveled 36 miles.

However, I recommend you not to take these figures at face value. These are all hypothetical scenarios.

For instance, it has been found out that a land turtle will only cover about 6 miles in a month!

Turtle Vs. Snail: How Much Distance Can They Cover In A Day If They Are In Water?

It will be unfair for snails to be compared against turtles based on their swimming ability. Remember, snails can only float, not swim. They rely on water currents as a means of transportation when foraging.

So, if the water current is strong, they will cover a significant distance, and if low, vice-versa.

But sea turtles are a different breed. They can cover more than 82 miles a day! They enthusiastically travel transatlantic distances in search of mating partners and food.

How Does A Snail Move?

Snails do not have legs. Instead, they have a muscular organ known as the “foot,” where muscle fibers contract and expand – which helps them in locomotion.

But before they flex their muscles, they release proverbial slime from their body, over which they slide and cover the distance.

And again, if they have to attach their body to a surface like glass or substrate, they dispatch large amounts of slime and make a membranous seal (epiphragm), which provides adhesiveness.

How Does A Turtle Move?

Unlike the complex mechanisms that help the snails move, turtles have pronated elbows, allowing them to move their appendages. They utilize the same mechanism while walking or swimming.

Final Words: Which Is Slower, A Turtle Or A Snail?

We know that snails and turtles are among the slowest species on earth. And one is even slower – of course, it is the snail. But it is like comparing apples to oranges. So, no fine line can be drawn for comparison.