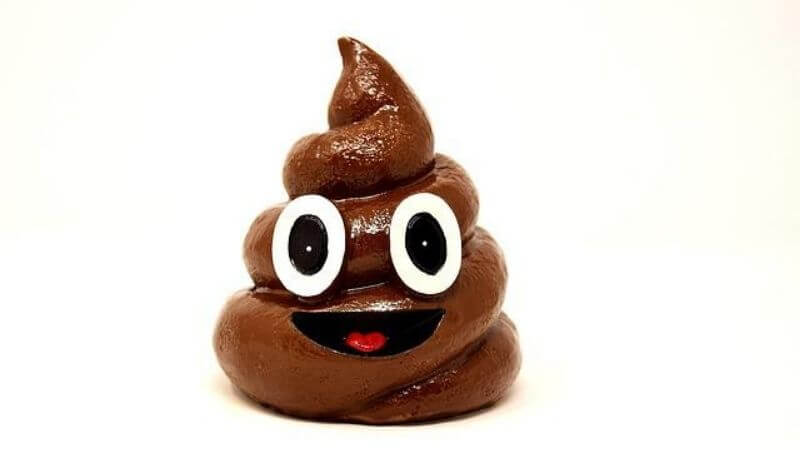 Snails aren’t picky eaters. Instead, they relentlessly pursue food sliding on their slimy path and will only call it a day once they are fully satiated.

And judging by the amount these gastropods consume, it’s natural they poop a lot. But what if their poop seems bizarre? How bizarre?

I often get messages of people reporting their snail excreting freakish white poop. They seem terribly worried that something is wrong with their pal’s health.

So, is white poop a red flag?

Why Is My Snails Poop White?

The color of your snails’ poop depends on the food they consume. So, if your snails have been binging on cuttlebones lately, it could be the reason behind them defecating white poop. Calcium-rich diet can make their poop white.

Cuttlebone is a favorite calcium supplement for many pet enthusiasts. Previously, it was esteemed in the bird-keeping community only.

But recently, aquarists have used it to feed their fish, invertebrates, and reptiles to fulfill their calcium demands.

Also, cuttlebones’ affordable prices and easy availability have made them a go-to choice for many. So, it was only a matter of time before snail keepers would jump on the cuttlebone bandwagon as well – and for all the right reasons.

Snails require calcium regularly. They need it for shell development and steady growth.

However, there are other alternatives that you can use instead of cuttlebones. These options mainly involve the use of calcium blocks which have other inorganic components compressed in them.

Should You Worry About Snail Pooping White Feces?

No, you need not worry if your snails’ poop is white. This is considered normal. However, if you don’t like what you see, you can cut off cuttlebones from your snails’ diet for a while.

But personally, I’d recommend against it. For example, feed your snail carrot; it will excrete orange-colored poop. It’s perfectly natural and expected.

Therefore, you need not worry about white-colored poop.

Snail poop is thread-like with a sticky texture. After the poop dries, it becomes dark and shriveled, making a “c” shape. The poop’s color depends on the food your snails consume. For example, if you feed carrots or pumpkins, expect orange poop the following day.

So, How Much Cuttlebones Can You Feed Snails?

It is unlikely that your snails can finish up cuttlebones in one sitting. Most of the bones will dissolve in the water. So, the amount of cuttlebones depends on the tank size rather than the snail population or appetite. A 4 to 6-inch cuttlebone will be an approximate estimation for a 10-gallon tank.

That being said, there are plenty of leeways here.

Like with us, food drastically affects the color of the snails’ poop. So, it begs the question – how does a snail’s digestive system function?

First, snails crush their food using radula, a flexible band of thousands of minuscule teeth. This crushed food is then pushed toward the alimentary canal.

Their alimentary constitutes of buccal mass, esophagus, crop, stomach, intestine, and rectum. The canal also has salivary and digestive glands.

To the sides of the crops are two salivary glands, which help digest carbohydrates like sugar and starch.

After the first stage of digestion, the food pulp is carried towards the gullet. There’s a blind sac that lies behind it. This is where the digestive glands are located.

The digestive glands then work on the rest of the undigested carbohydrates, protein, and lipid.

In the third stage of digestion, the undigested food will pass through the digestive tract located in the intestine.

Ciliated grooves on these tracts resorb simple sugar molecules from the undigested food.

How Do Snails Poop?

Snails poop through their anus, located near the mantle cavity. The feces pass through a tiny hole at the bottom of their shells. The same hole is used for breathing when snails are coiled deep inside their covers during hibernation.

Snails leave C-shaped poop discharged from the tiny hole below their shell. Once dried, the waste will curl at the ends and appear darker and shriveled.

Why Is My Snail Poop Yellow?

The color of the snail poop depends on the food they consume. Perhaps, you have been feeding them carrots or pumpkins recently, which explains the sun-bleached color.

Why Is My Snail Poop Red?

Owners often mistake red-colored poop for blood. But that is not the case. For example, snails whose regular diet consists of tomatoes or cherries will excrete red-colored poop. Also, those who recently had chicken or other protein supplements will poop red.

So, if you change their diet, expect brand new colored poop. They are mysterious like that.

Why Is My Snail Poop Brown?

The color of the poop depends upon the food snails ingest. So, you need not worry if your pals excrete brown-colored poop. Their poop becomes brown when they eat soil and substrate, which snails often do. This is perfectly normal and healthy.

Like brown poop, snails will also poop black when they eat soil. While scaping leftovers from the substrate, they eat soil, which explains the dark color.

Should I Clean Snail Poop?

Snails will eat their own poop. Yes, it is true. Small and juvenile snails will be more than happy to clean the mess left by the bigger ones. But if you notice there has been no such scraping activity, you will have to scoop them out.

Leaving snail poop in the aquarium will increase the aquarium’s bioload. In addition, the undigested waste will not readily dissolve in the tank – thus, it will affect the water’s pH, nitrite, and nitrate level.

So, it will be better to clean snail poop before changing the water.

It is nothing out of the ordinary for your snails to poop white. They have likely been feeding on cuttlebones or other calcium-rich food.

Your snails’ calcium supplements can also make their poop white.

If you are bothered by your snails pooping white, I’d recommend you change their diet for a few days and see how it goes.

Let me reiterate once again – I have consulted with my vet in this regard, and he said that it is entirely normal and healthy for snails to poop white feces.