Why Are Discus So Expensive? 8 Honest Reasons Why! 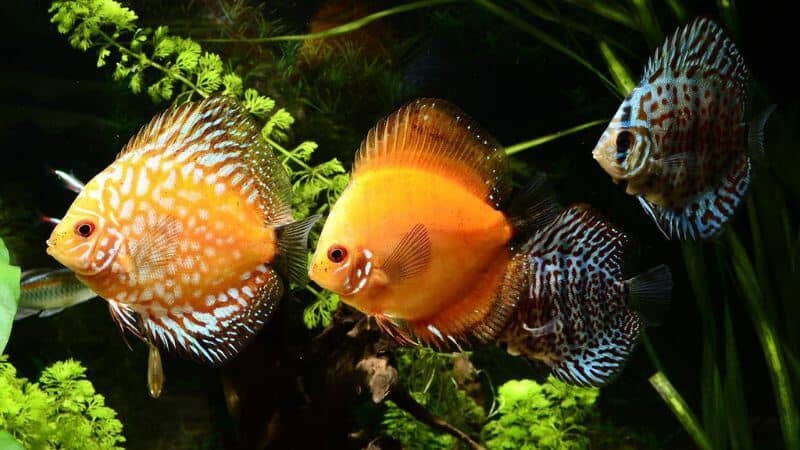 Discus are often called the kings of the aquarium, and they sure look the part – don’t they? With a distinctive shape, intricate pattern, and piercing eyes – these cichlids are head-turners; they are conversation starters.

Alas, they also cost a pretty penny. One hobbyist on a forum shared that he sold a discus for $2000!

But why are discus so expensive? And why are they so popular despite the hefty price tag?

In today’s blog, we will be decoding why these fish from South America are so costly. Let’s begin!

Why Are Discus So Expensive?

Discus cost hundreds of dollars. These fish they’re extremely hard to breed. Getting them to pair and creating the environment for breeding is something that only seasoned aquarists can do. Even then, the chances are slim.

Also, they are late bloomers. So it takes a good amount of time before they’re ready to reproduce.

Therefore, the supply of discus fish in the market is quite low. And the demand is quite high, thanks to their unique appearance and rarity.

And what happens when demand exceeds supply? The price rises. And that’s exactly why discus are so expensive.

They Come From A Distant Place

Most tropical fish species come from Southeast Asia. However, discus hail from the Amazonian River Basin.

Their place of origin alone is a reason enough to “justify” their high price – at least, that’s what everyone thinks. Amazon is home to some of the rarest species available in the trade.

On top of that, discus fish’s natural distribution range is quite limited. They’re mostly found in the lower reaches of the Trombetas, Nhamunda, upper Uatuma, Rio Negro, and Abacaxis Rivers.

As a matter of fact, a significant number of discus now come from farms in Southeastern Asia. These days, very few of them hail from South America.

However, since their origin and history are tied to the Amazonian River Basin, they fetch a handsome price even if it’s a captive-bred specimen.

Discus choose their own mates. You cannot buy a male and female online and expect them to breed right off the bat – chances are they never will.

If you’re looking to buy a mated couple, they’ll probably cost you thousands of dollars – I wish I was exaggerating. So, the well-trodden path is buying several specimens at a young age and hoping some of them form a pair.

Discus fry become free-swimming about 4 days after hatching. In the past, the breeders used to remove the parents as they thought that parents consumed their babies as angelfish do.

However, by accident, it was found that parents’ presence is crucial for the fry’s survival. Turns out baby discus eat something from the sides of their parents as puppies do.

Turns out that little “something” is food produced by the cells or glands in the parents’ skin.

Besides that, maintaining the right water parameters for breeding is tricky. For instance, the water should have very low amounts of electrolytes, and the total hardness should be less than 1 dH.

On the flip side, the water should have a high amount of humic acid and tannins, which means that the amount of fungi and bacteria is drastically low.

Also, the water should be prepared through reverse osmosis and routinely checked at short intervals.

I can go on and on about achieving the right parameters for breeding discus. But I hope I got my point across.

TL;DR – Breeding discus fish is tricky. First, raising the fry into adulthood is difficult. Next, getting the water parameters right in the first place to breed is extremely challenging.

One of the main reasons why discus are expensive can be explained with a simple economics principle – high demand and low supply. If you’re reading this article, you probably know how popular discus fish are.

And the thing is that supply of these fish is way lower than what’s required to meet the demand. So you know what happens next – the price skyrockets. This is even more true for certain discus strains like Albino gold leopard and albino lemon yellow.

The Travel Is Costly

Another reason discus fish cost a premium price is the risk associated with transporting them from the fish farm to your doorsteps. The poor fish makes a journey of thousands of miles.

As we discussed above, the majority of discus fish available in the trade come from Southeastern Asia. My apologies for being Captain Obvious, but that’s quite far from the US.

So naturally, the trans-shipper has to house the fish, treat them if they’re unwell, and absorb losses if some die from travel fatigue. It’s only fair that these factors come into play when determining the final price of the fish.

Raising Them Is A Tough Job

It’s common knowledge that discus are some of the most labor-intensive fish to raise. For instance, they’re super picky about the environment they live in. Getting the parameters right is quite a feat in itself.

So raising and breeding discus fish to achieve big and better specimens with the best colors is almost a full-time job. You cannot throw a couple of discus fish in the pond, feed them, and come back a few months later to scoop out hundreds of discus fry swarming in all directions.

It doesn’t work like that. Discus fish need super specific water conditions and diet, as well as plenty of space to even spark some possibility of breeding.

So, to cut a long story short, discus are high-maintenance fish, and raising them costs quite a lot. Hence, the high price.

They Take Time To Grow

Discus fish lead a long lifespan. They live for 10 years on average and can easily live past 15 years if provided the right care. Thus, they grow slowly.

These fish grow only about 2.5 inches long during the first 3 months of their lives. The growth to 4 inches can take as long as 4-5 months.

And what does that mean? The breeder must take care of the little fry for a long time before these fish are deemed eligible and old enough to be sold.

The sheer patience and dedication required to raise discus babies to the age deemed saleable is one of the reasons these fish cost so much.

Only A Few Make It To Adulthood

The process of creating the ‘perfect’ discus fish is anything but perfect. Hundreds of young fry are culled in order to breed and raise only those with “desirable” strain.

As inhumane as this practice is, it’s also a waste of a good chunk of resources and time. The breeders have to compensate for several dozens of culled fry with a few selected specimens.

So obviously, the marked price is going to be quite high.

That’s about it. This is our take on why discus fish cost an arm and a leg. I saw a few sites that listed the discus’s size and temperature requirements as some of the reasons they’re expensive, but I couldn’t connect the dots.

Anyway, let’s look at some frequently asked queries before we end this blog.

How To Add Calcium To Freshwater Aquarium? 12 Proven Ways!

What Is The Average Price For A Discus Fish?

The average price for discus fish ranges from $48.99 to $239.99. The cost varies depending on the fish’s appearance, age, sex, and strain.

I strongly recommend avoiding price extremes – especially if you’re new to the discus-keeping hobby. Don’t buy the cheapest ones because they most likely come with inborn defects. And don’t splurge $200 on a fish that can die from your lack of experience.

Why Are Discus So Hard To Take Care Of?

Discus fish are hard to take care of because they require notoriously clean water, have specific dietary requirements, and don’t breed easily.

What Are The Most Expensive Discus Strain?

The most expensive discus strains are:

Final Words: Why Are Discus So Expensive?

Discus are definitely one of the most striking fish to grace the planet. And boy, are they expensive! There are even discus championships held in some countries. Yep, they’re prized like that.

Cutting to the chase, they’re so expensive because the demand for these fish is super high, whereas the supply is way too low. And why’s the supply low? These fish are incredibly hard to look after and next to impossible to breed.