Why Are Guppies So Colorful? Why Is My Guppy Losing Colors 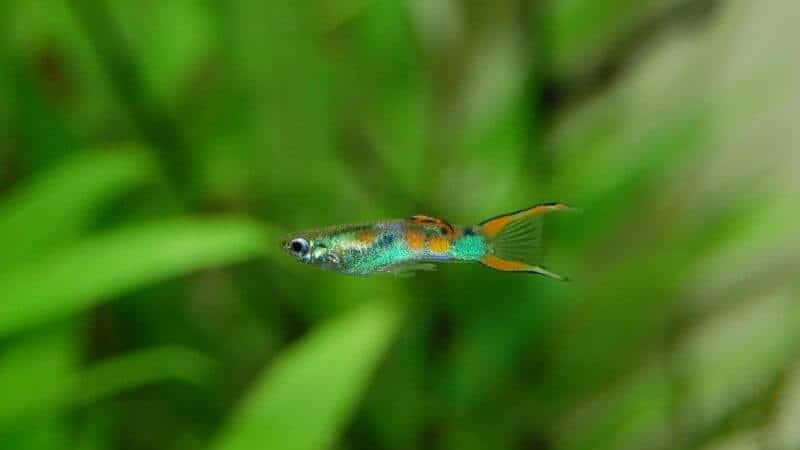 In the animal kingdom, it’s often the male species that’s better-looking than females. Science says male animals have no choice but to grow prettier as they have to compete for females’ affection. The same is the case with our beloved guppies. The guppies that we all love today are the results of thousands of years of complex evolution. So, let’s find out why guppies are so colorful and everything about it.

Why Are Guppies So Colorful? This Is What Science Says

According to a study conducted by University of Illinois researchers, genetics is why guppies are so colorful, with the main motive being finding potential mates for reproduction. For millions of years, males have evolved and revolved to retain these colors—especially the shade of orange that female love the most.

But there’s a small twist. The adjective “colorful” should only be reserved for male guppies, which come in highly colorful patterns with iridescent stripes and stops.

Let’s find out why.

Why Are Male Guppies Colorful While Female Have Dull Colors?

The answer to this is rather interesting. It was discovered by scientists from the University of Edinburgh and Exeter.

The male guppies sport bright, vibrant colors because they have chromosomes that only exchange genes at the very tips. Thus, the colors can only be received by male guppies and are almost unchanged.

The fact that male guppies inherit most of their genes from a male parent is why colorful appearance has been preserved through several generations. Since female guppies lack chromosomes that exchange genes just at the top, they don’t inherit the colors.

How Long Does It Take For A Baby Guppy To Get Its Color?

Guppies take up to three months to fully grow into adult fish. As for color, a guppy fry will start developing color when it’s about 1-6 weeks old. By the time your guppy is 8-10 weeks old, it will be fully colored.

Generally, male guppies receive their color quite sooner than females.

Guppy’s colors and patterns are genetic. However, over time, its environment can shape its color in many unprecedented ways.

First of all, we need to understand that at least 3 pigment cell types from several skin layers contribute to the color patterns.

Factors like guppy’s age, the water chemistry, and the stress level your guppy is experiencing are three critical factors contributing to color change.

Throughout several generations, the color and pattern can also change to adapt to the local environment. For example, guppies that live in the same streams as cichlids tend to have duller colors.

That is because it helps guppies camouflage better and saves themselves.

Why Is My Guppy Losing Color?

A guppy losing its color is not a good sign. It can happen due to several reasons such as stress, poor water environment, harsh lighting, and lack of nutrients.

Here I have listed a few possible causes briefly:

Stress is the number one cause behind a guppy losing its color. Now, the anxiety can be triggered due to various reasons. It can be constant bullying and fighting in the tank, sexual frustration, introducing a new tank mate, or territorial aggression.

Another usual suspect is poor water parameters. Guppies prefer brackish water naturally but are hardy fish that can survive a wide range of conditions.

However, poor water quality may directly be linked with loss of color. Ensure that there’s no spike in toxins like nitrites, nitrates, and ammonia, which can be fatal to your guppies.

I have heard of instances where some sellers inject artificial colors in guppies to make them look attractive. In that case, the color will usually wear off within a few weeks.

So if your guppy is quickly losing color, sometimes, it’s just that it is returning back to its normal, less colorful state.

Guppies have a broad appetite and should be fed accordingly. If they’re regularly being fed just flakes or pellets, there’s a possibility that your guppies are not receiving all the nutrients they need.

The lack of nutrients will directly reflect on size and color eventually. So make sure to diversify the diet by adding bloodworms, vegetables, and even algae.

Sometimes, the reason behind lackluster guppies is deeper than stress or nutrition. A guppy with an underlying disease will naturally lose or change its color. For instance, if your guppy has ich, that will lead to white spots all over your guppy’s body.

Another equally concerning disease that can alter a guppy’s color is Saprolegnia fungus. Likewise, the stress caused by illnesses like swim bladder disorder, dropsy, and gill flukes can also result in color loss.

How To Increase Guppy’s Colors?

While genetics plays the most pivotal role in a guppy’s coloration, the environment can also make or break the deal, as we discussed above. A few proven methods like feeding color-inducing food, correcting lighting conditions, and addressing diseases can help your guppy get back its color soon.

Let’s have a look at a few of them in brief:

A guppy that’s well-fed will always grow into the right size and colors. However, if you’re looking for a specific color-inducing diet, frozen crustaceans can be your best bet.

Crustaceans are rich in pigments that can contribute to orange, yellow, and red colors in guppies.

Addressing the diseases at the right time can help your guppy get back its color.

For ich, you can clean the tank regularly with the help of malachite and formalin-based products. If the fins have rotten, you will have to use a vet-recommended antibiotic.

For Saprolegnia fungus, an antifungal medicine will do wonders.

Guppies need about 12 hours of light each day.

If you’re trying to boost your guppy’s color, you will have to elevate your lighting game. Lights in the bright light spectrum (10,000k) will enhance the appearance of your guppies with a shimmery, iridescent tone.

For that, I would go with Aqueon Aquarium Clip-on LED Light.

Stress is one of the most overlooked factors when it comes to guppies and colors. But it plays a decisive role. From improving water parameters to making sure there’s no overcrowding, from adding live plants to ensuring harmony among tankmates, several factors are considered.

Just remember that if your guppy is happy, that’ll show in its color.

Suppose a male guppy has rare, bright colors. In that case, a female will perceive him as a better and healthier candidate for reproduction.

If he sports the color orange, even better.

For female guppies, the bright orange spots are one of the main criteria when choosing a partner.

Females choose their mates depending on the size and number of colorful spots on the male’s body. For them, the orange, black, and blue patterns indicate a male guppy’s ability to elude predators and forage food.

Yes, you read that right.

Now don’t think it is just all vanity. Turns out that bigger brains also mean smarter brains in guppies.

The researchers believe that the extra cognitive ability that comes with a bigger brain allows females to keep better mental pictures of the males in their heads as they swim back and forth between prospective mates.

Scientific studies have shown that female guppies saw mates differently based on what kind of environment they’re in.

However, in high-predation environments, it turns out that females aren’t too picky, as they can’t distinguish colors as clearly as they would in a low-predation pool.

It looks like guppies take the saying’ beauty lies in the eyes of the beholder’ quite literally.

When it comes to colors and guppies, asking why guppies are so colorful is just the tip of an iceberg. Here’s yet another fun bit of information.

Colorful Male Guppies Have A Better Survival Chance In The Wild

In the guppy universe, I guess the good-looking guppies have it all.

In addition to having an easier time wooing females, they have another massive advantage under their belt.

Predators have a hard time locating a uniquely colored or patterned guppy.

That is because, in the predator’s mind, there are already preset images of what a prey looks like. Predators have a hard time targeting fish with unusual patterns.

So if a guppy has a rare pattern, they receive minimal attention from the predators.

Guppies Can Change Their Eye Color To Put Off Rivals

Your otherwise social and amicable guppy can also be frightening and dramatic.

Did you know guppies can change their eye colors to deter their rivals?

When they’re feeling aggressive or warn other fish, their eyes can quickly turn jet black. The irises—the colored rings—turns black from silver within a matter of seconds. Most probably, when they’re feeling agitated, the nervous system sends out the signals to change the color of cells present in irises.

Usually, this behavior is shown by larger guppies towards smaller ones whom they can easily beat in a fight. However, interestingly, the smaller ones do not return the gesture.

This behavior is not just exclusive to guppies. Guppies’ distant cousins like salmon and tilapia can also turn their eyes jet black in a flash to show their aggression.

Conclusion On Why Guppies Are So Colorful

The main factor behind a guppy’s colors is genetics. There are at least three pigment cell types from various skin layer that make up the color pattern. The colors play a very important role in attracting female guppies for mating. Thus, male guppies have evolved to retain the black, blue, and orange spots.

While the development of colors is entirely genetic, the environment also does affect the pigmentation and size of spots that male guppies adorn.