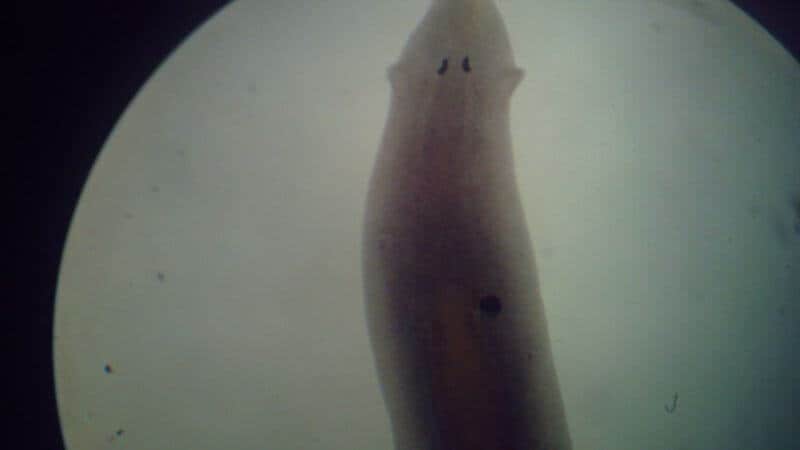 “Planaria” by Rodrigo Díaz Lupanow is licensed under CC BY 2.0

You have finally wound up here. Worms in turtle tanks are a common problem. But it isn’t only a turtle thing. Worms are present in all sorts of animal enclosures – ranging from fish to dogs.

Let me tell you why and how these worms come and how to get rid of them. Let’s begin.

Why Are There Worms In Turtle Tank?

Worms like detritus and planaria are the result of a dirty tank. So yes, if you are seeing these white wriggly worms in your tank, it means that you aren’t performing enough water changes. Dirty filters, unclean driftwoods, and accumulation of organic waste are the reasons behind worms in a turtle tank.

What Kinds Of Worms Are Present In Turtle Tank?

Mainly, two types of worms are present in a turtle tank, presumably, a dirty tank. They are detritus and planaria. Both are the consequences of negligence.

Let me explain each of them in detail and how you can remove them from your turtle tank.

These are the whitish, thin, and wiggly worms you often see in the turtle tank. They belong to the annelid phylum, the same as earthworms, leeches, etc. There is no single type of detritus worm – there are thousands of them! And they aren’t only white. They can be brown, red, black, etc.

They can grow about an inch long. They are excellent at hitchhiking too. They can come into a tank by attaching to sand, driftwoods, substrates, and even fish.

Usually, detritus worms are found living below the substrates or in an aquarium filter. But as their numbers increase rapidly, their food and oxygen supply reduces, causing them to climb up to the surface. So, if you see detritus worms inside your tank, this only means their population has outgrown normalcy.

Are Detritus Worms Harmful For My Turtles?

Frankly speaking, there’s no need for you to worry if you see detritus worms in your aquarium. Most tanks have these worms, and they aren’t harmful to your turtles or fish. In addition, they do not feed on your pets or cause illness to them.

Turtles will readily eat them and bring the number into order. First, however, you need to know why there have been detritus worms overgrowth in the first place. Getting rid of these worms is easy, but you need to consider the reason behind their rapid growth first.

Why Are There Detritus Worms In Your Turtle Tank?

Every aqua-hobbyist has to deal with detritus worms in their tank. But you need to know that they don’t really pose any harm besides making the tank look unsightly. These worms are expert hitchhikers and stick on plants and fish. They may also have arrived by sticking on the substrates from another tank.

This is the most common type of detritus worm seen in a turtle tank or aquarium. These worms are long, white and can expand or contract their body, just like the earthworms.

They feed on decaying organic matter with the help of their tube-like extension. They are entirely harmless to your turtles.

I have read much misinformation regarding worms in tanks. Here is one common misconception among hobbyists. People think that white worms are the only safe worms in a turtle tank – and red, brown, or any other color means trouble for your pets. However, this isn’t true.

There are red or brown detritus worms too. These worms are safe and can be seen moving freely inside an aquarium. Detritus worms are similar to earthworms, and we all know the importance of earthworms in making farmland fertile.

These detritus worms have a long, straight, and reddish-brown appearance. They live in your aquarium filter and tend to come out during cleaning. Most hobbyists fear and panic during their first encounter with these worms. However, they are harmless to your turtles.

Overfed tanks often result in an infestation of tubifex worms. These worms feed on leftovers and other wastes produced by the tank’s inhabitants.

You need to look at the amount of food you are giving your turtle to control the population of these worms. Turtles are messy eaters and leave up to 30% of their food as leftovers. They will not even bother eating these odds and ends.

This is the reason behind the rapid growth of tubifex worms in your aquarium.

How To Get Rid Of Detritus Worms In Your Turtle Tank?

Complete removal of detritus worms isn’t recommended since these worms are necessary decomposers. However, suppose you want to keep their population in balance. In that case, you have to change water frequently, stop overcrowding and overfeeding, and make sure you have great filtration.

You shouldn’t go overboard while feeding turtles. The leftover food becomes the breeding ground for worms and parasites. Cut the food by ⅓ of the regular portion to see if there’s any improvement.

Are Detritus Worms Harmful To Humans?

No, detritus worms are not parasitic – thus, they are not harmful to humans.

Although uncommon, planaria are another type of worm found in a turtle tank. Their number can rapidly increase and infest an aquarium if unattended. So, many aquarists consider them as pests.

One weird fact about planaria worms is that, even if you cut them into 5 pieces, they will regrow from those pieces. So, it is better not to smash or crush them if seen in your aquarium.

In appearance, planaria are small and can grow up to 0.6 inches in length, making them easy to miss. You will only be able to notice them after they grow in large numbers.

Are Planaria Harmful For Turtles?

Yes, unlike detritus worms, planaria are strictly carnivores and will scavenge weak turtles. They do not proliferate like detritus worms, but they can attach themselves to vulnerable turtles, fish eggs, turtles’ internals, etc. Symptoms like bloating and loss of appetite are often seen in turtles who have been harmed by planaria.

How To Get Rid Of Planaria In Turtle Tank?

There are a few ways to get rid of planaria from a turtle tank. Planaria infestation isn’t related to dirty tanks or wrong water parameters. Some popular methods are using bait and chemical treatment.

First, you need to put the bait in a mesh bag. Then, turn off the lights, and let the planaria swarm over the meat. Wait for a couple of hours, and pack the bait along with planaria. You need to repeat this until you notice a significant decline in their population.

There are very few fishes that can truly eat pure planaria. So, take this advice with a grain of salt.

This is one of the harshest yet most effective treatments to get rid of planaria in a turtle aquarium. But nowadays, the product used for this isn’t available in the market. So, you have to go for the next best remedy for this round. You can use ParaGuard, Pipzinem PraziPro, Super Ich Plus, Nitrofurazone Furan 2, and other parasite-removing treating chemicals.

Here’s the dewormer that I use to treat my turtles from any worm-related diseases.

Final Words On Why Are There Worms In Turtle Tank

Although hardy creatures, turtles are still susceptible to worms and parasites in their tank. However, not all worms are to be perceived as dangerous. For example, detritus worms are one of the safest worms that often show up in your turtle tank. But overcrowding of these detritus worms also indicates several things – the need for a new filter, moderate feeding, and the need for a water change.

Unlike detritus, there are worms that are bad for your turtle tank. These worms are generally parasitic in nature. Planaria is one such worm. They are microscopic and can live inside a turtle’s intestine, causing severe harm.

Use chemical treatments like metronidazole, praziquantel, Paraguard, PrazilPro, Levamisol, Piperazine, Fenbendazole, and other worm-killing chemicals without harming your turtle.

But once they make it inside a turtle’s internals, water change alone will not be enough to remove these parasites.