Why Are Turtles Slow? Are Box Turtles The Slowest Turtles Ever? 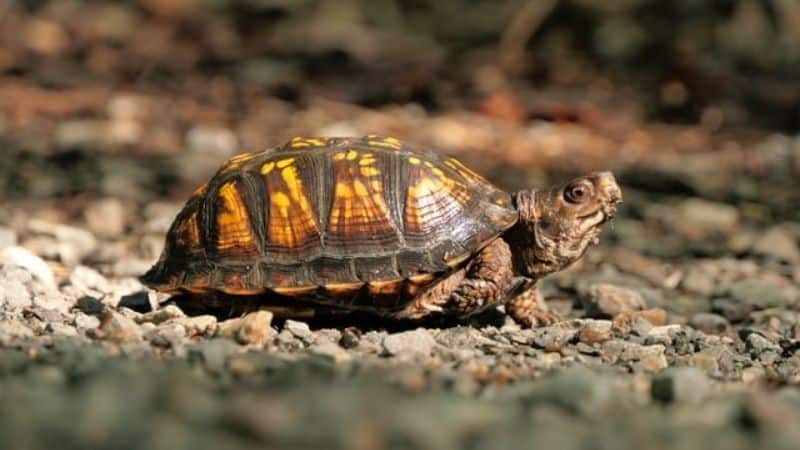 Not all animals love living in the fast lane – especially turtles. Constantly stereotyped and ridiculed for being slow and ‘sluggish,’ turtles have their own reasons for living the slow life. And it’s nothing short of extraordinary. If it was, they wouldn’t have survived over 3 mass extinctions!

Why Are Turtles Slow?

Turtles are slow because they don’t need to be fast. Most of their food is stationary, they don’t have to run from the predator as the shells protect them, and they have a slow metabolism. Their anatomy isn’t best suited for running either.

Turtles Don’t Have To Chase Food

Most turtles are herbivores. As they get older, almost all turtles transition to a herbivore diet. And since their primary source of food – plants – are stationary, they don’t have to chase around for their next meal like most animals do.

Similarly, they seldom have to go the extra miles to hunt down insects, critters, and fish for protein supplements. So, in short, turtles don’t have to put up a struggle for food – lessening their need for speed.

Turtles Have Protective Shield Against Predators

The shell is the most iconic feature in a turtle’s body. These keratin shells are strong enough to deter most predators in the wild – offering adequate protection without turtles having to do anything other than retract.

When a turtle retracts into its shell, most predators simply let him be and try their luck elsewhere.

We all know about turtles’ infamously slow metabolism that causes them to hibernate for months during winter. Turns out, it’s also responsible for their slow speed. On the surface, this seems like a disadvantage, but it’s actually good for turtles.

Faster metabolism translates to faster aging. And since turtles have a slow metabolism, they secrete lesser amounts of unhealthy metabolic products that compromise their physiological health.

A turtle’s anatomy is such that it naturally makes them wary of fast movement. Speeding will only lead to broken bones and shells, bruises, and sprains. So, over the million years, speed was naturally selected against.

Also, turtles have relatively shorter, tiny legs compared to their big bodies. As a result, the front and back legs cannot stretch too far or offer generous flexibility. And that’s because the legs have been designed to accommodate their carapaces – leading to compromised speed.

So, these are the four main reasons turtles lead a slow life, and these same points apply to sea turtles as well.

Now you know why are turtles slow, let’s see what they’re capable of and whatnot. To begin:

Yes, turtles can definitely run, but their speed is quite substandard. It’s reported that a turtle can move at a rate of 3 to 4 miles per hour. Impressive for a turtle, I must say. However, running isn’t their favorite sport. They only run if they have to run for their lives.

Here’s a fun video. What do you think?

Turtles only run and sprint into the water if they feel threatened. Sliders and Cooters are some excellent examples!

Also, in the video, did you notice the turtle doesn’t bounce around or gallop while running as most animals do? This up and down motion helps with speed, but it exhausts energy. And you know turtles are all about saving that energy.

What Is The Fastest Turtle On Land?

Softshell turtles are the fastest turtles on land. They have an average walking speed of 3 miles an hour, but it’s a different story when it comes to running. It’s been reported that Softshell turtles can run more than 15 miles per hour!

One reason behind this could be their rubbery, soft, and flat shells that don’t put much pressure on their bodies.

Bonus: Snapping turtles can reach the speed of up to 174 miles per hour when striking. That’s almost as fast as a racing car. However, the strike only lasts for a split second – so it usually goes unnoticed!

Are Box Turtles The Slowest Turtles Ever?

We cannot say that with certainty, but Box turtles are some of the slowest turtles we know. Their average walking speed is 0.17 miles per hour, while their running speed is 0.25 miles per hour. It means a box turtle will barely be able to cover 100 yards in a full day of walking.

However, in water, the speed increases notably. They can usually swim 5-6 miles per hour but can increase it to 22 miles per hour if they sense danger! However, short limbs and heavy shells make them clumsy swimmers.

That’s why Box turtles seldom run when attacked. They retract into the shell like nothing happened!

But some other species give box turtles a run for their money when it comes to being slowest. A documented adult Wood turtle has a speed of 0.2 miles per hour. Likewise, Bog turtles are reported to travel only 17 meters a day!

Why Are Turtles Fast in Water?

Turtles are usually faster in water because their anatomy is more suited for that element. Most aquatic and semi-aquatic species have webbed feet and long claws making it easier to paddle and swim away in the water.

Why Do Sea Turtles Swim Slow?

Do you know one documented Leatherback has traveled over 12,000 miles round-trip across the Pacific, from Indonesia to the United States? But they don’t have as impressive swimming speed as we’d like to imagine. This study has the answer.

On average, sea turtles usually swim at a speed of 1.6 to 6.2 miles per hour, with a bit of variation among species.

What Is The Fastest Sea Turtle?

Leatherbacks take home the title for fastest sea turtles on the planet. According to San Diego Zoo, they can swim up to 22 miles per hour! However, this speed is often only achieved during brief bursts like flight reactions.

Let’s look at the tentative comparison table for all seven species.

Sea turtles owe this speed to their handy pair of flippers. Over million years, these flippers have evolved to not just help swim but forage, dig, defend, attack, and so much more. Also, flippers are only unique to sea turtles.

Even aquatic species that live in ponds and brooks, like Painted turtles, don’t have any. That’s why their swimming speed is considerably low in comparison.

Conclusion On Why Are Turtles Slow

If you read through the whole article, you definitely know turtles aren’t as slow as we think!

Anyway, turtles are slow because they simply don’t have any need to be fast. Otherwise, they’d have adapted some fast locomotive skills in their 215 million-year-old existence!

Turtles don’t have to grind hard every day for their meal as their food is usually immobile. They don’t have to run from danger since they can simply hide under the shell. They have a slow metabolism that makes their speed low and conserves energy. And lastly, their anatomy is not built for the fast lane! These are the 4 main reasons why are turtles slow!