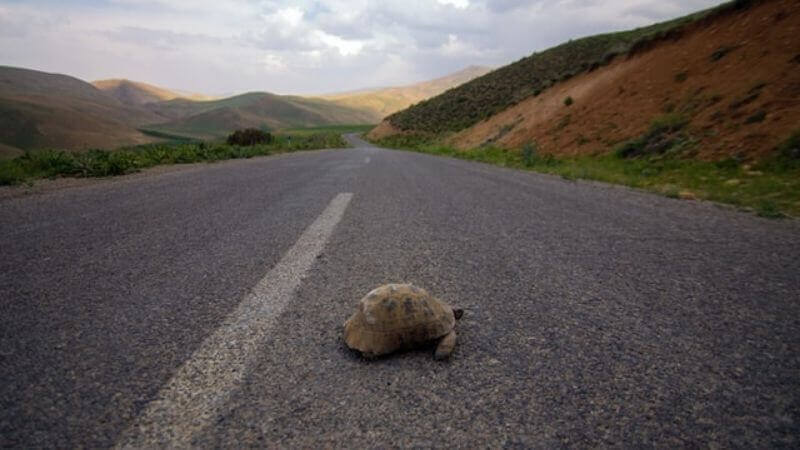 Why do turtles cross the road? This isn’t anti-joke rhetoric like the ones about chickens. This is an interesting question about an important phenomenon tied to their very existence on the planet. Let’s find out why.

Why Do Turtles Cross The Road?

During mating season, turtles come out of their natural habitats and cross roads because males are in search of their potential mates, while females are looking for a suitable nesting spot. This usually happens in late spring and early summer.

Male turtles will travel from pond to pond in their quest to impregnate as many females as possible throughout the mating season . And consequently, once fertilized, females will haul out of ponds, lakes and brooks to find a spot with ample sunlight and drainage.

So, in the bigger picture, it’s all about producing babies, rearing young ones, and ensuring their survival, you see.

Turtles have been here for more than 200 million years. They crossed the paths of dinosaurs. Today, they cross our paths. And they’ll continue doing this long after when we’re gone. Just think about it!

But when does this exactly happen? Should you be on lookout?

Do Turtles Get Cold? Guide To Ideal Water And Basking Temperatures

How To Tell The Age Of A 3-Toed Box Turtle? Be An Expert!

When Do Turtles Cross The Road?

Most turtles go into hibernation in October and come out in April.

So, if you live in an area with a nearby turtle population, you have to be especially vigilant from April until June/July. Also, be extra careful on rainy and humid days because aquatic species prefer these weathers for their trip.

That’s because they’ll instinctively know that they won’t dry out during the journey.

This all seems like nature’s sweet wonder, right? It is no doubt, but there’s also a grim side to this saga. Keep reading and you’ll know why.

Why Should You Help Turtles Cross The Road?

All turtles that cross the road don’t make it to the other side. Year after year, thousands because of collisions with motor vehicles. In some places, the rate is so high that for several species, the risk of the entire population base being wiped out is very high.

Only 1% of all the eggs laid by turtles make it to adulthood. And our reckless road behavior is largely to blame.

Turtles are long-lived species with low reproductive outputs. Thus, the survival and wellbeing of female turtles are critical to the survival of their population.

And given that female turtles are almost always killed disproportionately in road accidents, it fuels the gradual localized extinction of turtles.

This may sound far-fetched, but it’s absolutely true and has happened in several places across the US. Just losing a handful of female turtles to vehicle crashes every year carries the potential to threaten survival of entire bales.

How To Identify A Turtle On The Road?

Aside from being watchful, there are few other ways to spot a turtle on the road. They usually look like bumps or oil slicks. Once you give it enough berth form for passing, make sure to turn on your hazard lights to notify others of their presence.

Normally, it’s easier to identify if the turtles are moving in groups.

How To Help A Turtle Cross The Road?

First, make sure that the road’s safe. You can inform other motorists as well. Next, pick the turtle by gently holding both sides of the body – just a bit ahead of their hind legs. Next, carry him and place him on the intended side of the road.

Be super careful not to drop the turtle.

Although they look very hardy, long handling can cause serious injuries including a broken spine. Make sure that you don’t pick, hold, and place them abruptly.

It’s important that you keep the turtle moving in the same direction he was headed. If you put him on the opposite side of where he was going, he will once again try to cross the road.

To place, pick an area that isn’t too sunny and has some level of

Even if he is moving away from a water body, don’t try to manipulate his course as he certainly has a fixed  destination in mind. Aquatic turtles often travel quite far from from ponds and lakes in search of a female.

Relocating a turtle to an unfamiliar place won’t just cause him unsolicited stress but also weaken his immunity and expose him to foreign diseases and parasites.

But if their planned location is hazardous, like a parking lot, you can send him off to another direction.

One study showed that Painted turtles above the age of 4 had a severely tough time learning where to forage and live. They also had a super low survival rate during winter. Thus, it shows that a turtle’s brain is hardwired to their native area and don’t easily learn to survive elsewhere.

How To Help A Snapping Turtle Cross The Road?

Sometimes, the helpful gesture can result in painful condition – if you are dealing with a Snapping turtle.

The Common Snapping turtle is one of the most frequently seen species on the roads, stretching from northern Florida to eastern Texas. They are known for their ferocious predatory skills that can lead to deadly consequences, even for humans. On top of that, they’re very insecure in land and will immediately become defensive.

They have long necks and can very well turn back, left and right to bite you. So, don’t ever try to pick them up.

What you can do is gently scoop it up with a shovel or gently push it from behind with a blunt object. Please don’t use anything with a sharp edge, as it can easily inflict injuries.

Here’s a great video showing how you can help a Snapping Turtle cross the road. I’d suggest using your own judgment and decide what’s best for you and the turtle.

This earth is a shared home. In fact, turtles aren’t on our way – it’s vice versa. That’s why it’s our duty to help them cross the road. From spreading the word to being vigilant, helping an injured turtle to placing him on the right side and direction, there are several ways you can contribute.

If you see turtles crossing roads in your area, spread the word. Post it on the community group on Facebook, tell your neighbor, or share during Sunday church service.  Don’t forget to explain how the community and motorists can help.

Once the mating season for turtles commences, lower your speed and pay close attention whenever you’re near the areas where turtles cross roads.

Be even more eagle-eyed on rainy and humid days.

When you’re trying to help a turtle, especially on highways, you can sometimes put yourself or fellow motorists in danger. Carefully study your surrounding and traffic situation before pulling off to the side.

Turning on your hazard lights can help you grab attention.

Make sure that you haven’t stopped in heavy traffic areas, freeways, and areas with blindspots.

And turtles don’t always need help to cross the road.

Sometimes, the turtle can be injured and may try to bite you when handled. Also, some species are naturally more aggressive than others. If possible, just stand as guard while the reptile crosses the road.

If you have to carry him, grab him gently along the shell near the edge or midpoint of the body. Wrong handling can result in injuries. And don’t try lifting by the tail as it startles the turtle.

Note: Turtles tend to empty their bladder when lifted off the ground. Be careful not to drop it if pees midway.

Don’t Take Turtle With You

It can be tempting to rescue the ‘poor’ turtle and take it home with you. But remember, turtles can easily live up to a few decades and cost you thousands of dollars in care.

And lastly, turtles born and bred in the wild don’t like living within the four walls of a tank, no matter how big it is.

If you decide to adopt a wild turtle on a whim, you’ll only be compromising both yours and the turtle’s way of life.

If you come across an injured turtle, carefully put in a box, and rush to the nearest veterinarian, an animal shelter, or a wildlife rehabilitator. Since turtles have slow metabolism, they can survive even if their shells are crushed, and they’re living under agonizing pain.

Also make a point to note the detail of the rescue location so that the turtle can be restored to its natural habitat once he’s healed.

Conclusion On Why Do Turtles Cross The Road

So, why do turtles cross the road. It’s definitely not to chase the chicken. They’ve been doing that for long before the chickens arrived.

This usually happens around late spring and early summer, when turtles are fresh out of hibernation and looking to welcome the mating season.