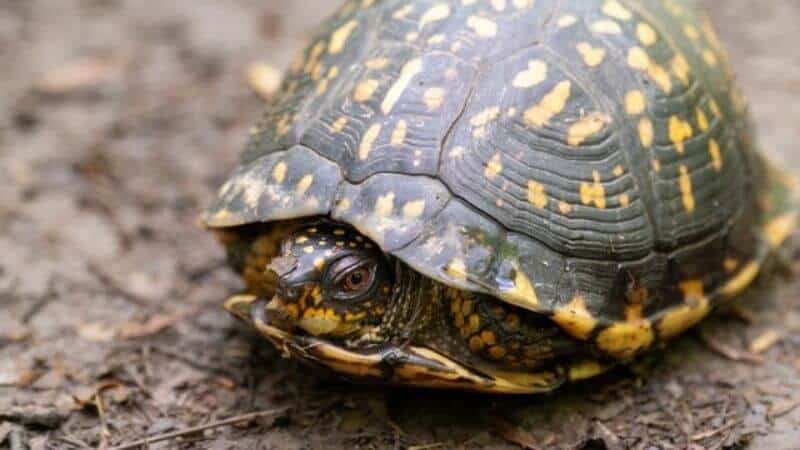 Very few animals carry their home on their backs as turtles do. This easy retraction of its body parts in an instant is one of the grounds for their longevity. But is there any particular reason they have to hide in their shells?

So, why do turtles hide in their shells? When a turtle senses danger, it hides in its shell. Also, when the water parameters and temperature aren’t optimum, a turtle will retract. A sick turtle suffering from respiratory illness also tends to hide inside the shell.

A turtle isn’t gifted with a fast pace or wings to escape the predators. Thus, to compensate for this, turtles have evolved to have giant, strong shells where they hide to be safe from predators.

A turtle’s shell is a safe haven that can hide all parts of its body and will not leave it exposed to anything.

Though seemingly rigid from the outside, turtles have flexible body parts. They can retract their hands, limbs, heads, and tails inside their shell during any sort of danger.

Why Is My Turtle Always Hiding?

A pet turtle often becomes anxious in a new habitat. It takes some time for a turtle to adapt. So even if there’s slight discomfort, it will hide in its shell. You don’t have to worry immediately if your new turtle is always hiding. Just give it some time to explore its tank, and it will come out of its shell.

However, if your turtle is hiding in his shell all the time, it could be due to multiple reasons. The temperature of the water isn’t optimum for him, or the water parameters have worsened. Check nitrate and nitrite level using a standard water testing kit.

Here’s an easy and quick-to-use water testing kit that I use for my turtle tank.

Another reason your turtle isn’t coming out of its shell could be due to illness. Turtles often get diagnosed with respiratory infections.

So, a proper basking area with UV lights emitting UVA and UVB rays should be installed right above your tank.

So, Can All Turtles Hide Inside Their Shells?

Why Can’t Sea Turtles Retract Inside Their Shells?

Sea turtles have a flatter carapace than other turtles, which leaves no room for them to retract their head into the shell. Also, sea turtles have large flippers that let them take big strokes in the water. And these flippers are too large to retract into their shells.

Evolution is responsible for a sea turtle having a flatter shell. The flatter shell streamlines with a turtle’s body and lets it swim faster than other turtles. A sea turtle has to cross thousands of miles for nesting and foraging. And its streamlined flattened shell helps it conduct those marvelous feats.

How Much Can A Turtle Retract?

Not all turtles can retract all of their legs and heads inside their shells.

Terrapins and freshwater turtles can retract partially and will fold their legs and necks in danger. They will retract and fold their necks to the side in an S position. And most aquatic turtles aren’t able to retract entirely into their shell; however, they will fold and slouch to protect themselves.

Land turtles like tortoises can retract every part of their body entirely inside their shell.

Could there be any reason behind land turtles or tortoises retracting fully, whereas the aquatics are only partially able to do so?

But land turtles can’t swim well. They spend almost their entire lives on land, making them vulnerable to several predators, who are obviously faster than them. This is why nature has given them dome shells that can fit the entire body for protection against enemies.

Watch this interesting video of an Eastern Box Turtle hiding when being handled.

Anatomy Of A Turtle Shell

Though we only observe the upper shell, also known as carapace, a turtle also has a shell on its lower part of its body. It is called a plastron. Both these shells are made up of scutes which are formed by the deposits of keratin. This is the same substance that makes up our hairs and nails.

Scutes make up the outer part, whereas a bony layer gives structure and that protective shield to a turtle’s shell. This inner layer of the shell is fused just like in all vertebrates. Like us, turtles have vertebral columns and ribs running below the shell.

X-raying a turtle’s body, we can see that the vertebrae of their neck, limbs, and tails are small. This helps a turtle in retaining much-needed flexibility while retracting. The middle part of a turtle’s skeleton shows a large vertebral column that is rigid and fused with the bony layer of the shell.

This means that a turtle’s shell is a part of its body and has nerve endings in it as well. It can sense touch when you put the finger on it. So, you shouldn’t paint your turtles with nail polish and artificial colors as it can have a severe impact on a turtle’s shell.

Whenever the turtle’s shell gets broken or cracked, it can get infected and even lead to death. To know more in depth about fixing an injured turtle shell, check out this article.

True Purpose Of A Turtle’s Shell

It might come as a surprise to you, but the reason behind shells in turtles is not only for protection but also for hunting. To know further, we have to understand the two categories of turtles.

So it begs the question which type of turtle first developed the shell? And was the purpose of the shell indeed for protecting them?

Newly found fossils of the Platychelys Oberndorferi revealed that the ancient turtles had no retractable heads. This further suggests that the turtle’s un-retractable head did not point any hints towards the shell being a safe haven for turtles as we thought before. However, these are all assumptions.

So these findings begged for even research on why these ancient turtles had semi-retractable necks.

Turtles like Mata Mata turtles from New Zealand also have partially retractable necks. The North American Snapping turtles too. And in the wild, both these turtles use their necks for hunting.

During the hunt, they will retract inside their shell and wait for their prey. When their target appears within their vicinity, they will thrust their neck out with dazzling speed and attack. This spring-like force generated through retraction is so powerful that it will crush their prey in an instant.

So, do these new findings shed more light on the evolution of turtles? We will leave it to the researchers.

How Hard Are Turtle Shells? Do They Really Keep Turtles Safe?

A turtle shell can withstand about 200 times its own weight. It can bear up to 100 pounds of pressure on its shell and still survive. But despite having the ability to withstand that much pressure, a turtle shell can still get damaged. Sharks in the ocean can break their shells after constant gnawing.

As for baby turtles, their shells aren’t yet fully developed and have high chances of breaking. Even a juvenile’s shell is pecked on and damaged by birds. These birds carry the turtle’s up in the sky and throw them down in the rocks. This fall from a great height often breaks the carapace and kills the turtle.

Therefore, even with a shell, turtles are not safe. Though it increases their survival chances by far, evolution has also taught its predators how to break their shells and hunt them.

Conclusion: Why Do Turtles Hide In Their Shell

Turtles hide in their shells when afraid. They also hide when they find anything unusual in their surroundings. In case of illness like respiratory infections, your turtle uses its shell as a place to keep itself warm.