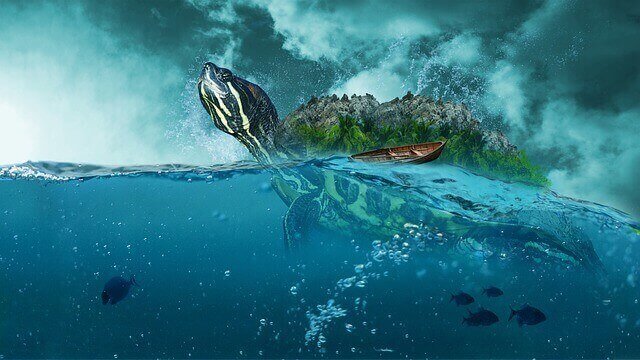 Blessed with long age, some species of turtles even outlive humans. Freshwater turtles have an average life span of 30 to 40 years. In contrast, the larger ones, especially sea turtles, live up to 70 on average. Once a turtle survives its initial baby stages, its adulthood growth will be steady with fewer predators in the food chain. But the question remains, why of all creatures, turtles are endowed with longer lives? Why do turtles live so long?

Let me tell you why do turtles live so long. Turtles have a slow metabolism rate which lets them burn less energy while at rest, opening up opportunities for longer lifespans. This is called a Rate-of-Living theory in the animal kingdom. Also, their dietary requirement and a lesser number of natural predators help in a long lifespan.

Turtles have a slow metabolism. Their slow pace of getting energy from the food is the reason for lesser food requirements to survive. They are cold-blooded animals, so they do not burn food to produce heat to maintain their body temperature. This also further preserves their energy.

However, we humans, or any other being with a high metabolism rate, have to rely hugely on foods for the body’s regular functioning.

We have to constantly break down the foods we intake, and thus our body parts are always functioning. And like machines, the tissues and cells in our body also wear and tear after prolonged use. This is also known as aging.

And when the body is unable to repair and remake cells and tissues like before, we age, and wrinkles start forming in our body.

And in turtles, due to the slower metabolism rate, their cells and tissues aren’t worked enough to age rapidly like ours. This is why the freshwater turtles, despite being tiny in size and weight, can live up to 40 years of age.

In the wild, a grown turtle has few predators. Their rock-hard shells bolster their defense against predators. Furthermore, turtles like Stinkpots secrete strong odor infilled liquid towards the predators when in danger. These sorts of defense mechanisms help a turtle survive against its predators.

However, a baby turtle has lesser chances of surviving in the wild. Its shell isn’t well developed at this stage, and its limbs aren’t sturdy enough to swim away from danger. This is why the infant mortality rate in turtles is very high.

Of 100 sea turtle eggs, only around one turtle makes it to adulthood. Rest are devoured by birds, foxes, bigger turtles, etc.

But once the turtle reaches adulthood, very few predators try to prey on this defensive creature. An adult turtle climbs to the top levels in the food chain. That’s why the average lifespan of a grown turtle is hitherto higher than other creatures.

As mentioned earlier, a turtle has a calm nature with no excessive aggression towards anything or anyone. This inactivity lowers the metabolism rate, resulting in a longer life span.

Naturally, turtles are slow and do the bare minimum for daily mundane tasks. Most of their time is spent basking and resting. Their lifestyle is similar to that of sloths. And yes, sloths have the slowest metabolism of all animals.

This docile, stress-free lifestyle of turtles is another reason for their longevity.

Most turtles are omnivores, with few exceptions. Turtles in their baby stage need lots of protein and calcium. This is why their diet is heavily based on protein sources like meats. They consume insects, small fishes, crustaceans, and other critters.

And as they grow older, their diet switches towards plant-based diets consisting of aquatic plants. Studies have shown that herbivore creatures tend to outlive carnivores. Herbivore diets have lesser cholesterol and fats and longer shelf life than meaty diets. However, research again indicates that omnivores outlive both herbivores and carnivores.

Omnivore turtles feed on both plants and meat, thus expanding their palate for nutrient-rich food.

So, their overall dietary requirements contribute to the extended lifespan of turtles in the wild.

Another way diet helps longevity is that most of their foods are either stationary or are available nearby – For example, aquatic plants and critters.

Thus, turtles don’t have to climb or jump heights to find their next meal, which drastically reduces chances of injuries and accidents.

When talking about the infant mortality rate in turtles, two facts separate a freshwater turtle and a sea turtle. Relatively, a freshwater baby turtle has a higher chance of survival than a baby sea turtle. It is because of the presence of fewer predators for the former.

Often the freshwater doesn’t have larger aquatic predators compared to marine predators. This is also a reason why freshwater baby turtles grow into adults without much difficulty.

Which Turtle Lives The Longest?

The green sea turtles have the longest lifespan among turtles. They can live up to 80 years of age. Myrtle, a green sea turtle in Cape Cod Aquarium, has lived for over 90 years.

Do Turtles Live Longer Than Tortoises?

No. A tortoise will outlive a turtle. A giant tortoise can live for more than 150 years, whereas a sea turtle has an average life span of 70 years. There have been reports that a tortoise named Adwaita might have lived over 255 years.

Final Words On Why Do Turtles Live So Long

Turtles have a long history in the planet earth’s diary. They have existed alongside the dinosaurs and are also present today with us. It is their miraculous ability to slow down their metabolism, which has increased their survival chances.

Not only metabolism, but habitat, diet requirements, and their intrinsic nature have also played a role in extending their lifespan.

However, we have already caused enough harm to these turtles. This is why we need to be the best versions of ourselves, conserve their habitat, and prevent them from going extinct.

Do Turtles Get Cold? Guide To Ideal Water And Basking Temperatures