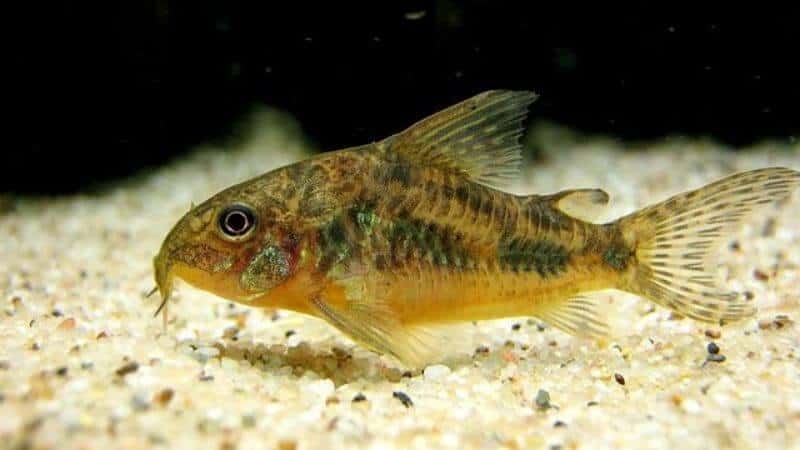 Fish aren’t as expressive as cats and dogs. No, let me rephrase that. We don’t understand fish as much as we know our furry pets.

Most of the time, it’s us who fail to notice the subtle ways fish communicate they’re not ok. If a fish is behaving out of the ordinary, there’s a good reason behind it. So, if you’re wondering, “why is my fish swimming up and down?” you’ve come to the right place.

A fish swimming vertically and erratically can be amusing to look at, but there’s more to it than what meets the eye. So let’s look into it without further ado!

Why Is My Fish Swimming Up And Down?

A fish swimming up and down the sides of the tank is known as glass surfing or pacing. The most likely reason behind it is stress, induced by the wrong diet, foul environment, and ill health. Other times, it could simply mean your fish is bored and is entertaining itself by chasing its reflection.

If your paces up and down just occasionally, you need not worry. Your fish is probably just chasing its own reflection or a microorganism. This behavior can also be seen when the fish is being introduced to a new environment, the water is changed, or when you approach the fish (it thinks you’re going to feed it).

However, if this quirk doesn’t seem to go away, it could spell a problem. If the correct intervention isn’t made on time, this could even prove fatal. Now, let’s look at these reasons in detail.

Recommended: How To Save Dying Fish After Water Change?

I can’t stress enough how important it is to maintain the right parameters at all times. There’s simply no room for error. For example, a fish swimming up and down along the glass could mean it’s trying to obtain more dissolved oxygen.

Fish produce a considerable amount of bio-waste daily. So, you must never skip water changes. The rule of thumb is to conduct a 20%-25% water change daily, but it depends on the size of your tank and stocking numbers.

It’s a common misconception that smaller tanks are easier to care for. But it’s actually false. Smaller tanks are, in fact, more temperamental than the big ones.

Also, a lot of time, beginner fishkeepers rush through the cycling process or skip it entirely before adding the fish, which inevitably costs them dearly.

Here’s a quick snapshot of ideal water parameters for different kinds of tanks:

Remember, the figures shown above are the minimum and maximum levels that fish can tolerate. Therefore, it’s better if you achieve numbers somewhere in the middle of these ranges. That being said, it’s more important to keep the parameters consistent than achieve certain numbers.

So, if you’re interested, I have dropped the link below.

Sometimes, we tend to go overboard and keep more fish than what our tanks permit. And as you know, overstocking comes with its own long list of disadvantages. For example, it will make the water dirty quicker, fuel territorial aggression, and cause fight breakouts, eventually leading to stress in fish.

If your fish doesn’t have enough space to swim freely in the tank, don’t be surprised if it resorts to pacing up and down. Also, most fish are territorial – even more so if there’s space scarcity. So, you see where I’m going. All these factors add to a fish’s stress, forcing him to resort to erratic behaviors.

And let’s not forget – overstocking means the essential microbe colony in an aquarium will fail to deal with enormous amounts of waste created by the fish daily.

Recommended Readings: What To Do When Your Fish Is Dying?

I once had a lone pictus catfish that was actually supposed to live in a shoal. He would swim up and down against the glass in one corner all day long. So, when I introduced other members of the same species, his glass surfing eventually stopped.

Some fish lead a solitary life, but others prefer to be in the company of their own kind. Freshwater fish like mollies, platies, and guppies thrive the best when kept in groups. Schooling fish need to be at least in a group of 6, and the ideal ratio would be 1 male for 2 females.

In each other’s company, the fish will find amusement, solace, and much-needed security. They will then rarely get bored and resort to strange activities like swimming up and down.

Actually, it’s super important to know whether the fish is schooling fish or not before you buy them. If you keep fish that need to be in a group alone, it’s actually quite sad and borderline cruel. So, always make sure to read up on your fish’s behavior and gauge if you can fulfill their unique needs before you buy them.

Fish pack a lot of personality than we give them credit for. They have complex hierarchies, power plays, and pecking order in place. So, if you house incompatible tankmates together, it’s a no-brainer that the underdog will be under immense stress. A bullied fish lives with a constant fear of losing its life, and you can only imagine how detrimental it can be for their mental and physical wellbeing.

For example, you should think twice before housing fish with long, flowy fins with fish like angelfish and bettas as they are notorious for nipping fins.

Likewise, you shouldn’t house small fish like guppies with fierce and predatory fish like tiger barbs and convicts. And if you add multiple male gouramis together, the dominant male will relentlessly bully the subdued males.

So you see, it’s not exactly rocket science, but you do need to tread carefully when choosing what species will live together in your tank.

As much as we try to emulate the natural conditions of the wild, it’s impossible to provide our fish with the same quality of life they’d have in nature. However, that doesn’t mean we shouldn’t try. Above all, the best thing you can do is give your fish plenty of space in the tank.

There’s a common myth that larger tanks are more difficult to manage, but it’s pretty far from true. The thing is, with larger tanks, the water parameters are a lot more stable than they’d be in a small tank. They also get polluted at a slower rate.

A small or over-cramped tank won’t just pollute the water but also fuel other complexities, like territorial and mating aggression, in the tank. So always make sure to read up on how much space do your fish needs before stocking them.

I can’t begin to tell you about emails I receive about stressed betta fish. In most cases, upon further inquiry, I find that the poor fish is living in a 2-gallon tank! No wonder it is stressed! I always recommend them to get at least a 5-gallon tank for bettas.

Sometimes, an underlying illness can cause a fish to swim in strange patterns, including up and down pacing against the glass. If you suspect it’s the illness causing the problems, be observant of the fish’s behavior. It will most probably display signs like panting, lethargy, faded colors, and loss of appetite.

Now, the disease could be caused by an injury, a parasite, or abnormalities in the water. Move the diseased fish to the quarantine tank and treat both tanks as needed to eliminate potential parasites.

Parting Words: Why Is My Fish Swimming Up And Down?

Here’s a short rundown of all the crucial bits in case you missed it:

Don’t worry about occasional glass surfing. It’s expected behavior. Most often, you will see the fish swimming vertically when it’s exposed to a new environment, when you perform significant water changes, or when you go in front of it to feed. They’re even known to do so when chasing their reflection or out of boredom.

However, if this behavior persists consistently, there might be some bad news. The chances are that your fish is severely stressed, and the poor thing is venting out. But, again, there can be several reasons behind stress, ranging from hostile tankmates and polluted tanks to underlying illness and loneliness.

So, make sure to experiment with different ways to relieve stress until you find out the real problem!

How Often Do Angelfish Lay Eggs? Breeding Guide With Pictures

How Many Cichlids In A 75-Gallon Tank? Mbunas, Peacocks And South American