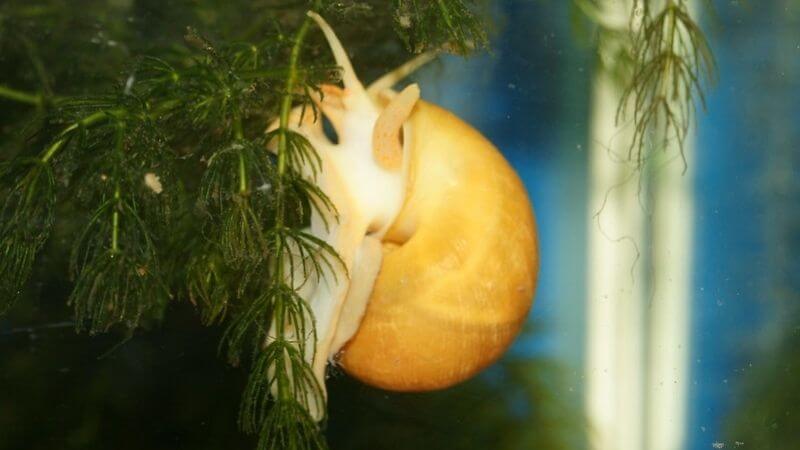 A mystery snail floating can be an unusual sight for many of us. It is because we do not take it for a creature brave enough to take a leap of faith.

And why is it riding the waves instead of performing daily chores like sticking on the glass or dilly-dallying around the plants?

So, let me tell you the reasons why mystery snails float in aquariums. It’s pretty interesting.

There can be several reasons behind mystery snails floating. It could be that air is trapped in their lungs, or the water parameters aren’t suitable. But the most plausible explanation would be that it is doing it wilfully to eat the biofilms present in the water.

Along with these three reasons, here are some other reasons why your mystery snail is floating:

If your mystery snail is a new addition, it will float to acclimate. Fresh recruits can take anywhere from a few days to a couple of weeks before they are fully adjusted to the new habitat.

You will notice the snail shutting its shell and floating on the water surface during this period. However, you need not worry because this is normal for them to act like that.

They Float When They Cannot Fart

This might sound preposterous, but it is what it is. This database report by scientists claims that snails do not fart. And, of course, your mystery snails aren’t an exception.

Which Animal Farts? And Which Doesn’t? Check here.

Although snails do not fart, they still produce gas in their body – nitrous oxide. We commonly know it as the “laughing gas.”

Snails living in poor water parameters are more prone to nitrous oxide buildup inside their system. This can be one of the reasons why your mystery snail is floating.

They Float When Their Lungs Are Filled With Air

Mystery snail’s mantle cavity is divided into two sections – monopectinate gill on one side and a lung on the other.

This means that they can respire on both land and water. This is why they are listed under the amphibious group.

And when there’s air trapped in their lungs, mystery snails float. We all know that the air volume in our lungs is directly proportional to our buoyancy. The same phenomenon is seen in mystery snails, too.

So, if there’s too much air in their lungs, they will need to open up their siphons and release it.

They Float When The Water Quality Is Poor

I’ve already mentioned how poor water parameters cause nitrous oxide buildup and a mystery snail to bloat. And naturally, a bloated snail floats.

In addition to that, mystery snails float when the ammonia, nitrite, and nitrate levels are beyond what their bodies can tolerate. This can make them ill, and they will have no other way to retaliate except floating.

We all know that snails are one hell of a slow creature. And it is hard for them to reach the hinterland where there’s abundant pasture. So, they will float and embark on a journey.

Like every other aquatic creature, snails have a good sense of water currents. So, they will surf these currents to navigate. Snails in the wild often do it.

But despite having sailing instincts like a pirate, captive mystery snails aren’t aware enough to know that they are in a tank and not in their wild habitat.

So, when there are too many inhabitants in the tank and the competition for food is fierce, they will try to float and reach areas with abundant resources.

And how are they able to float? Glad that you asked.

Snails can control the air level present in their lungs, which improves their buoyancy.

They will intake the atmospheric air through a siphon, which pumps air into the shell cavity.

Most mistake siphon for a snail’s penis. It is, in fact, a long tube that helps exchange fluids and air. Snails use it for breathing, locomoting, feeding, and reproducing.

Strong Currents From The Filter Can Make A Snail Float

A reliable and robust filter is indispensable. It performs one too many crucial functions, from getting rid of gunk produced daily to keeping nitrate and ammonia levels in check.

However, these filters come at a price. No, I am not talking about money – but the price your snails pay with their lives.

Powerful filters create strong currents while oxygenating water for the whole tank. So, when your snail gets caught under these currents, it will struggle and float.

To avoid turbulence, the snail will remain secluded in a corner or float where the water current is weakest.

Unable to fight with the water current, your snail will be exhausted and stressed, leading to fatal consequences.

One more complication that can arise due to strong currents is suppressed appetite – as a result, your snail will be malnourished.

Snails Float When They Are Sick

There could be multiple reasons behind a sick mystery snail. The presence of copper could be one. Like with all gastropods, copper is a snail’s kryptonite.

But many novice hobbyists are unaware of copper’s effect on snails and will use fertilizers for plants in their tanks.

And as most fertilizers contain copper, even a minuscule amount of it can deal a heavy blow, resulting in a mystery snail’s death.

Snails that come in contact with copper will have poison in their systems. Consequently, you will notice them floating and hanging out of their shell.

A Dead Mystery Snail Floats, Too

Yes, just like the body bags that you see in movies, a dead snail floats, too. It could have died from old age or a grave illness. I hope it’s the former.

And before you pronounce your mystery snail dead, you need to check for signs that confirm your suspicions.

Some of the telltale signs of a dead mystery snail are:

How Long Do Mystery Snails Float?

A mystery snail will stop floating after a few hours or a day if it releases the air trapped inside its shell. Sometimes, they might stay afloat for a couple of weeks, too. But you need not worry if the snail is showing movements.

But a word of caution: Do not transfer your snails to another tank if they are floating. Your snails could be acclimating, and removing them from the tank will only add more to their stress.

So, How Do You Stop A Snail From Floating?

You can help your mystery snail stop floating by correcting the water parameters and providing a well-rounded diet.

Also, look for signs like cracked shells and deep-retraction syndrome, which could explain the snail floating.

Fortify your snail’s diet by adding calcium supplements if it is suffering from any of these two conditions.

Here’s the calcium supplement that I give my snails:

There can be several reasons why your snail is floating in the first place. A good place to start is by checking water parameters. Make sure it is in optimum condition.

You can use this kit from API to test ammonia, nitrate, and nitrite levels.

Here’s what ideal water criteria should look like for your mystery snails:

A polluted tank gives rise to health complications. As a result, snails suffer from nitrous oxide buildup, which causes them to float.

So, it is recommended that you limit pollutants in the tank as much as possible.

Here’s a vacuum cleaner from Hygger that can help you keep your tank pristine.

Regular, in fact, daily changing water accelerates the speedy recovery of a floating snail. If your snail has been floating for several weeks, it is likely that the water parameters aren’t favorable.

So, until your snails come back to life, perform water changes daily.

So, Does It Mean That Mystery Snails Die That Easily?

Although mystery snails are hardy creatures, they aren’t invincibles. For instance, even the slightest traces of copper in the tank can lead to life-impairing consequences.

A word of advice: We like to think that snails are rugged enough to withstand any water condition. This assumption could be due to the fact that they are kept as cleaning crew members in most tanks. But you need to remember that even snails have Achilles’s heels.

Final Words: Why Is My Mystery Snail Floating?

Usually, newly introduced snails will float for days or weeks to acclimatize. But if your snail has been drifting for several weeks, you should check water parameters and make necessary changes immediately.

A few words of wisdom: You should never jump to conclusions in a rush. Sometimes, your snails could be just floating and having the time of their lives while you worry about them. So it might not be as bad as it looks.