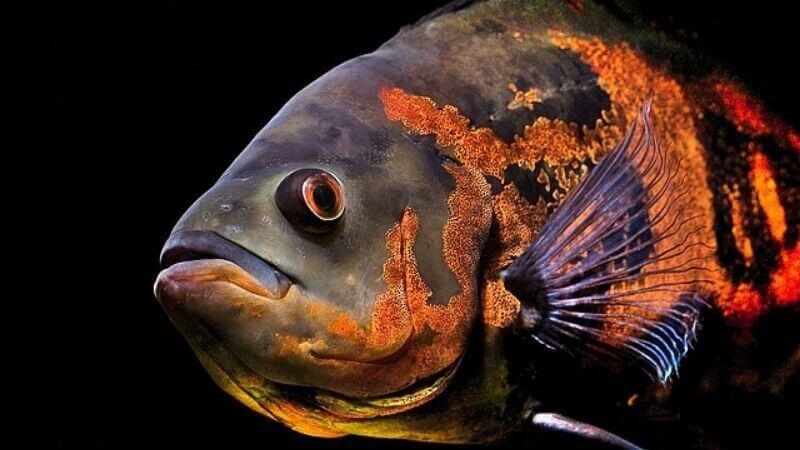 In my ten years of fishkeeping experience, I’ve never come across a fish as livelier and entertaining as oscars. It’s pure joy to watch them curiously investigate nooks and crannies, playfully chase tank residents, and beg for food as soon as they see me. So, one sunny day, when I saw my oscar lying on its side, I didn’t think much of it. But the following day, I woke up to find my fish shaking violently with bulging eyes. Turns out the reason why is my oscar fish lying on its side was swim bladder disease!

With the right and timely intervention, my oscar fish recovered well. But when I dug around the forums frantically in my quest for answers, I was surprised to see this is a ubiquitous behavior and that there could be so many underlying reasons behind it.

And that’s what inspired me to write this article. I’ve listed all the possible reasons behind why your oscar is lying on its side and potential solutions for it. So, without further ado, let’s get into it!

Why Is My Oscar Fish Lying On Its Side?

Oscars are highly intelligent fish that display a wide range of behaviors. So, oscar fish lying on its side is most often a sign of submission or stress. It could also be because the buoyancy was compromised by swim bladder disease. And lastly, it could be simply out of habit, like many hobbyists reported across multiple fish forums!

Here’s a detailed look into it.

Oscar fish love to live in a group, and as hard as it might be for us to fathom, they have a complex hierarchy in place. There’s a definitive pecking order, and your fish might climb up or down the tier depending on factors like age, health, and sex.

So, if there are other aggressive and dominant fish in the tank that have taken on the role of the supreme leader, your oscar fish may show his submission by lying on its side.

Oscar fish pack a lot of personalities. And even though they’re hardy species, they’re susceptible to stress like any other fish. There could be several underpinning factors fueling the stress. Maybe there’s not enough food or space, there’s another alpha male in the tank, or there’s an ongoing territory feud.

It goes without saying, stress invites a host of other diseases. So, if you see your fish consistently lying on its side, it’s time to evaluate the little creature’s environment. First, try to deduce the factor causing stress and address it.

This was the case with my oscar. The swim bladder could malfunction due to various reasons like disease, injury, or an abnormality. It affects the fish’s buoyancy, causing it to swim in weird positions. Besides lying on the side, the fish can also swim upside down, sink to the bottom, or struggle to maintain a normal position.

If you think it’s due to the swim bladder disease, fast the first for a couple of days. Also, slightly raise the water temperature. Then, feed a skinned pea on the fourth day and continue doing so for a few more days. And once you think your fish is recovering, slowly transition back to their staple diet.

If this method doesn’t work, maybe the swimbladder has endured an internal injury. In this case, it’s crucial to get in touch with a fish surgeon. They’ll either remove a part of the bladder or place a small stone in it to restore buoyancy.

The Water Is Toxic

Never skip water changes, and don’t cut corners when buying a reliable filter – we just can’t stress this enough! If the water is toxic, your fish won’t just lay on its side but also shimmy, vibrate, and suffocate! Upon researching across several forums, I found that toxic water was the number one reason behind oscar fish lying on its side.

Besides swim bladder disease, several other ailments can cause the oscar fish to lay on its side. Some common diseases they’re susceptible to are hole-in-the-head disease, ich, tail rot, fin rot, bloat, and popeye disease. And some common signs of these diseases are lack of appetite, irregular bowel movement, bulging eyes, erratic swimming, raised scales, and lethargy.

If you are careful from the beginning, almost all of these diseases are entirely preventable. For that, you need to ensure the water parameters are always topnotch, the fish is being fed a well-rounded diet, and the fish is getting enough exercise.

When you purchase your fish from a pet shop, it gets netted, packed, transported, and then placed in an entirely alien environment (your tank) which most probably has very different water parameters. So, no wonder your fish’s anxiety is off the charts.

So, if your fish lays on its side when you bring him home for the first time, it’s most probably because he’s very anxious. But, if the behavior doesn’t subside within the next couple of days, you might want to look into other reasons!

If you have ruled out all of the above scenarios, most likely, it’s just an idiosyncrasy. But before you conclude it’s just one of their many quirks, you have to be absolutely sure the water parameters are correct, and the fish isn’t stressed.

I’m including this point because several hobbyists across multiple forums revealed that their oscars lay on their side repeatedly without any issue.

Will Cichlid Fry Survive In A Community Tank? Try These 5 Tricks!

How Many Cichlids in a 55-Gallon Tank? Use This Simple Formula!

Why Is My Oscar Shaking?

Oscars usually shake their body as part of mating rituals. It’s also often accompanied by lip-locking. However, if it’s not courtship, it could be due to disease or stress. And if it happens too often, maybe your oscar has lost control of its nerves and muscles.

So once again, evaluate all the factors mentioned above. If the situation still persists, you might want to seek professional advice.

Oscars are pretty expressive. So, if anything’s wrong, you can tell it by their body language and behavior. Some telltale signs of a dying oscar fish are lack of appetite, lethargy, panting, faded colors, and fill flukes.

Let’s have a brief look at these signs.

It’s the case with almost all fish species, and your oscar is no different. Dying fish lose their appetite. So Oscars, who otherwise enthusiastically respond to being fed, will now deter food and eat very sparsely. They won’t swim towards the food anymore, and there will be plenty of leftovers in the tank.

Oscar’s brilliant red and blue shades will appear faded all of a sudden. Your fish may also develop dark blotches here and there in response to an injury or disease.

Note that during the breeding season, the colors get super rich and pigmented. But, once they’re done, the color fades. So, first, make sure the color isn’t fading due to this reason.

Oscars are quite intelligent, active, and social for most parts. They love to play around, occasionally bully tankmates, and definitely can hold their own in the tank. So, lately, if you see your fish has a subdued personality, doesn’t participate in tank activities, and becomes a lot more submissive than before, maybe it’s because he’s not feeling well and his days are numbered.

A dying fish feels lethargic most of the time. Your oscar may swim sporadically or not swim at all. He will also not respond to you as usual. In most cases, lethargy is the side effect of an underlying disease.

A dying fish, who has succumbed to old age or disease, will pant heavily. Watch your fish closely, and you will see it gasping for air with an open mouth. Your oscar may also swim to the top to inhale oxygen from the surface.

5 Reasons Your Oscar Fish Is Lying On Tank’s Bottom

Final Words: Why Is My Oscar Fish Lying On Its Side?

If you didn’t read the whole article, here’s a summary of all the main points for you.

Oscar lying on its sign is often a sign of submission or stress. However, in my case, my fish was suffering from swim bladder disease, which messed up his buoyancy.

Some other possible reasons are toxic water parameters, travel fatigues, or simply a weird habit!

When Do Cichlids Get Their Color? 4 Reasons Your Cichlid Isn’t Showing Colors