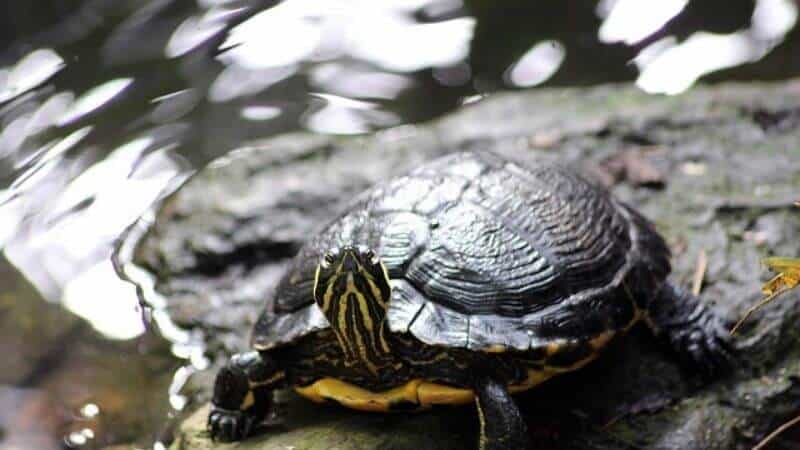 Although they lack vocal cords, turtles can still produce noises. You can hear a turtle hiss, grunt, whistle, squeal, roar, etc. Every type of sound they make means something. For example, a turtle usually grunts during mating and bellows when in extreme pain.

So, today we will be shedding some light on why red-eared sliders make squeaky noises.

If your red-eared slider is making squeaky noises, chances are high that your turtle is suffering from respiratory infection, a common illness in turtles. To be sure, check for nasal discharge, as well as bubbles in the mouth, nose, and eyes, or any sort of discomfort.

A turtle suffering from respiratory infections cannot breathe properly and will extend its neck and gasp for air by open-mouth breathing. This is when you will hear the squeaky sound.

Sometimes, turtles produce squeaky noise despite not suffering from respiratory illness. They do it on several occasions. Turtles, when basking, tend to yawn and make squeaky sounds as well.

Some pet turtles are clever, like dogs and cats, and will squeak to ask for food. This is because turtles have keen eyesight and know when their pet keepers are around. They will then produce squeaky noise so that you will feed them.

So, there can be numerous reasons behind a turtle squeaking. Let’s dissect them some more.

Respiratory Illness Can Be Behind A Turtle’s Squeaky Noises.

Turtles suffering from respiratory illness have labored breathing patterns. This is because both the upper and lower respiratory tract will be malfunctioning. As a result, the body lacks oxygen. So, they show signs like gasping and open-mouthed breathing to inhale sufficient air.

Captive turtles die every year due to respiratory illness. However, it is preventable and treatable if diagnosed early.

If you notice signs of respiratory illness in turtles, you need to take them to a nearby vet. Usually, vets will prescribe antibiotics. They can be administered in three ways – i.e., orally, in injection, or through nose drops.

Or, if your turtle is too sick, it may require intensive care at the animal hospital.

Food Large Enough To Swallow Can Get Stuck, Resulting In Choking.

Sometimes, turtles squeak when food gets stuck in their throat. Turtles lack teeth, so they have to swallow their food whole with the help of their tongue. And when the food pieces are large, your turtle will choke and make squeaky noises in desperation.

Turtles tend to swallow gravel and stones inside the tank. This could also lead to choking.

To prevent it, make sure you are chopping down food into smaller pieces. Also, always put their food inside water as they need water to swallow their food.

And if your turtle is choking, there’s not much one can do except take it to the vet immediately.

If your turtle is choking or has drowned, do not turn your turtle upside down. There may be little air left in their lungs. Also, turning it upside down can cause further complications.

Turtles Squeak When They Beg For Food.

Yes, turtles can act just like dogs and cats. In fact, they are famous for begging. They will instantly recognize your arrival near the tank and will begin to show signs like frantic swimming and squeaking while looking towards you.

Some red-eared sliders squeak, whereas some gurgle while begging for food. These noises don’t necessarily mean that you have been feeding them less. Turtles, especially juveniles and baby turtles, have an insatiable appetite and will beg for more food.

Turtles are susceptible to obesity, so watch the amount you are giving.

Wrong water parameters can cause turtles to squeak. For example, if the water temperature is too cold for them, they will squeak. Ignoring such noises will only lead to further complications, like respiratory infections.

Here’s a video of a turtle squeaking when bathed in cold water.

You will also hear squeaky noises when your turtles are adjusting their jaws. This is something turtles do when they are relaxing while basking.

One thing turtles hate is being turned upside down. This is the position that makes them the most vulnerable to predators. So, they will squeak when you carry them upside down.

Once familiar with your touch, they will eventually stop squeaking when you handle them.

What Other Kinds Of Sounds Do Red-Eared Sliders Make?

Red-eared sliders make sounds like hissing, grunting, bellowing, roaring, whistling, chirping, gurgling, etc. But, of course, these all depend on different circumstances.

Red-eared sliders hiss when they sense a threat.

They grunt when they have to do an arduous task, like pushing rocks or stacking upon another turtle.

This is a frantic cry for help. They bellow when they are in extreme pain.

Yes, turtles do whistle. Turtles suffering from respiratory infection have their nasal cavity blocked by mucus. The whistling sound you hear is the result of RI. See a vet immediately.

Baby red-eared sliders chirp to communicate with each other. They will also chirp while asking for food.

If your red-eared slider is making gurgling sounds, it means that he is hungry. Therefore, if you are feeding them an ample amount, you need not put food in front of them every time they gurgle.

Just like humans, turtles burp when they are full. They burp on both land and water.

Turtles release gas, especially after eating fruits. And, their farts are audible.

You can check more info on turtle noise in this article: Do Turtles Make Noise? What Sound Does A Turtle Make?

Turtles aren’t noisy pets. There’s always a reason behind any sound they produce. Squeaky noise doesn’t always mean that your red-eared slider is suffering from a respiratory infection. They also squeak while asking for food, if the food clogs their throat or the water is too cold or hot.

If your turtle is squeaking excessively, you need to take him to a vet before it is too late.