Why Is My Red-Eared Slider Not Eating? 8 Reasons Why Your Turtle Refuses To Eat 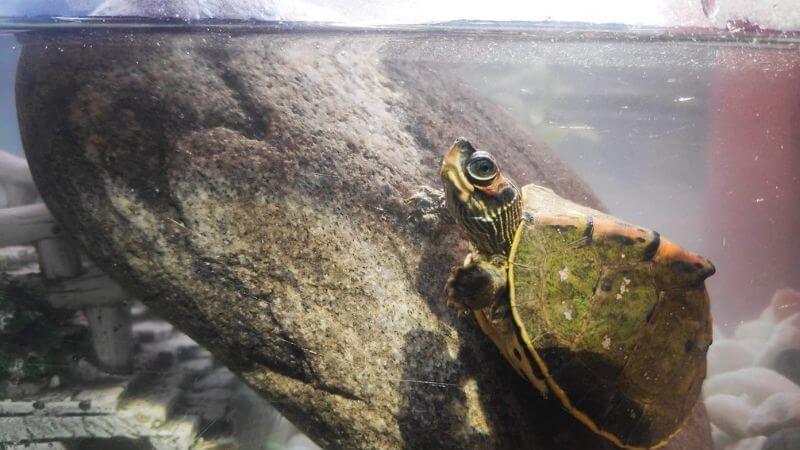 When I first got my red-eared slider turtle, I was over the moon. I showered him with fish pellets, and he loved it. I could watch him dive deep to find hidden treats all day long. Oh boy, it was such fun to watch him devour every sort of food.

I asked him, “Why is my red eared slider not eating?”

He replied, “It could be because of various reasons. Is your tank dirty? Are you feeding the right kinds of food?” Several questions followed.

So I pondered on where did I go wrong with raising my pet turtle. I knew I had kept my tank at the optimum level, and also, my feeding schedule was quite right. It wasn’t winter, and I also kept a heater in my aquarium with two UV lights for his basking place.

After futile attempts to decode the reason, I went online and asked a reptile expert in one forum. We exchanged words, and I sent her my turtle’s pictures to see if she can spot something unusual.

She told me that everything is normal with my red-eared slider. She said that turtles, after getting matured, often eat much less, and it is quite normal. And that was quite a relief for me. However, she also told me that many turtles, before reaching maturity, eat much less for several reasons.

Why Is My Red-Eared Slider Not Eating?

Red-eared turtles can go without eating for 1-2 days, and it is normal. Factors like change in environment, the temperature of the tank they live in, too much light, dietary deficits, and illness could be the causes behind a red-eared slider not eating.

Turtles can immediately sense a change in the environment. They can get quite stressed if there’s been an addition of new tank mates or plants in the aquarium. Likewise, when we switch their habitats, they often need more time to adapt to an unfamiliar environment. As a result, their stress levels spike, and they lose their appetite.

Also, turtles will take their sweet time to assess the new tank and surroundings to find spots where they can bask and rest.

These reptiles are also capable of detecting the change in water properties. If you have moved them or performed a water change, they get both curious and frightened simultaneously. Once again, as a result, they might not eat until they feel safe and adapt to the environment.

After being accustomed to the new environment, they will get back to eating again. You need to be patient with your turtle and give them time to do so.

If you are interested in getting a turtle as a pet. You can get every species of turtle in one place. Check out Tortoise town!

Here’s a thermometer that I use for my turtle tank.

Unlike most thermometers available in the market, this one shows temperature readings in both Fahrenheit and Celsius. The accuracy is quite impressive, too!

Do not place the pre-existing UV lamp closer to the basking area than necessary, as it might burn your turtle’s shell and hamper his health.

Here I have listed my favorite heater and UV lamp for my turtles. Have a look to see if they meet your tank’s requirements too.

Solidly built, accurate, safe, a powerhouse, and coming from a trustworthy brand – this heater from Cobalt Aquatics is one of my longtime favorites.

And here’s a UVB Heat Lighting Kit by Zoo Med.

The polished aluminum dome amplifies light and UV output by up to 30%. That’s amazing!

Though turtles are messy creatures, it doesn’t mean that you can keep them in dirty water. Most pet turtles are freshwater turtles. And you need to know that freshwaters are called freshwater for a reason. They constantly flow and aren’t polluted – thus, making a turtle’s habitat fresh and clean.

If a turtle’s habitat is polluted and contaminated, the water they consume will eventually cause ill health. This ultimately results in a turtle losing interest in eating due to appetite loss.

You need to install a sturdy filter and change the water regularly for your turtle to be healthy and eat properly. Clean the feces daily and take out stale feeds from the tank. Provide fresh foods and see if they feed on them.

If you’re looking for a filter, here’s my personal recommendation:

This uncompromising, state-of-art filter can pump out 700 US Gal of water per hour through multi-stage filtration. If you get this one for your tank, you don’t have to worry about a replacement for next five years or more.

Just like humans, turtles too get disheartened when they have to consume the same food every day. A turtle in the wild feeds on every sort of food. And when a turtle in captivity has to eat the same food daily, they will lose their appetite and stop eating altogether.

That is why you need to widen their palette. Even though it’s not possible to replicate their diet schedule as exactly as in the wild, make sure you try your best to provide them with a diversified. Include insects, plants, dry fishes, along with feeds that are rich in protein and calcium.

Many beginner turtle keepers often make the mistake of overfeeding their turtles. It is natural for a turtle not to eat when they are already full. Turtles aren’t like fishes who will gobble up everything even though they have just eaten. They like to rest and bask after they eat.

And when their tummies are full, turtles won’t eat the food put in front of them. Sometimes, if you keep a turtle together with fish, they will feed on a fish’s diet and won’t eat afterward. This often makes a turtle keeper think his turtles aren’t feeding on their diet. You need to keep a keen eye on such details.

Make a detailed meal schedule for your turtle, and do not feed them more than necessary. A baby red-eared turtle will devour everything you feed them. They are most active in infancy and the juvenile stage, as they need ample nutrition to develop their hard shell. But as they grow into maturity, their feeding prowess gradually drops. This could also be the cause behind your red-eared slider not eating.

When a turtle is sick, they do not feed even though they haven’t been fed for days. Signs like lack of appetite, no movement for a longer period, hiding inside the shell are key symptoms of a sick turtle.

Some other signs of sick turtles are:

A sick turtle will barely move, have puffed eyes, and wheeze all the time.

Turtles with eye problems also do not eat. The formation of debris can be seen in a sick turtle’s eyes.

If you notice any of the above mentioned signs, It is recommended that you immediately take your turtle to a reptile veterinarian.

A turtle can get stressed when they do not have enough swimming area in their habitat. A single turtle requires at least a 30-gallon tank to thrive. When you keep them in an overpopulated tank with many tank mates, they get stressed and won’t eat.

Turtles are solitary animals whose best company is themselves. So you need to make sure that your turtle is getting enough swimming space in the tank.

For this, make sure the tank is shallow and longer rather than tall.

A horizontally wide tank will give your turtle more space to discover and cope with the stress of living in an overpopulated tank.

Turtles also eat less or hesitate to eat when they are preparing to go for hibernation. Captive turtles seldom hibernate as everything is in order for them. However, some turtles, especially those caught in the wild, go into hibernation even if there’s enough food and heat to survive winter.

If your turtle tends to hibernate in the winter, you shouldn’t try to disrupt this natural process. If you aren’t sure if your turtle’s hibernating or not, look for signs like movement between the rear legs and tail.

If you have a red eared slider turtles, here’s a handbook on them that covers everything you need to know.

Why Is My Baby Red-Eared Slider Not Eating?

There are several reasons behind a baby red-eared slider not eating. It could most likely be the pellets you have been feeding them aren’t soft for their jaws. Other potential reasons are sickness, water temperature, slow adaptation and too much light in the tank.

Final Words On Why My Red-Eared Slider Is Not Eating

A red-eared slider is one of the most sought turtles to be kept as a pet. They bring joy to everyone who rears them. But if they are not eating, you need to look for symptoms and get to the root of why they aren’t eating. Some red-eared slider turtles do not eat for days and will normally feed after a few days. It all depends upon the mechanism. But remember that as these turtles mature, their appetite decreases; thus, you needn’t worry about that.