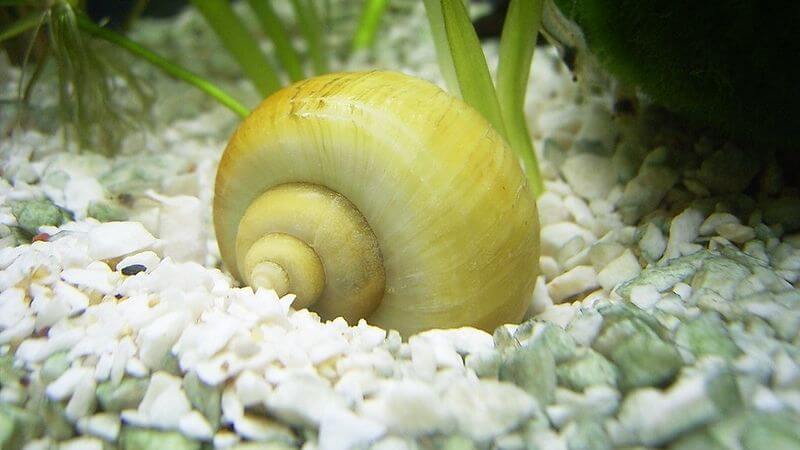 Is it dead? Oh, it just moved. Nah, it can’t be dead. I think it just twitched a little. Why would it sleep for so long? Maybe the water is too cold.

This is what the thought train looks like in most aquarists’ minds when their snail doesn’t show any movement for a while.

So, what could be the reasons behind a snail not moving?

To put breaks on your thought train, we will discuss the reasons why your snail is rooted to the spot.

Why Is My Snail Not Moving?

Snails aren’t your typical get-up-and-go pets, which explains their lack of movement. And if they have been unresponsive for long, it could be that they are stressed – commonly due to incorrect water parameters, threats from other tankmates, or suffering from an illness.

As I said earlier, snails aren’t hyperactive like some other aquatics. Instead, they spend a good chunk of their time sleeping.

If they were to write their rendition of Liz Gilbert’s book, Eat, Pray, Love, it would be Eat, Sleep, Repeat.

Unlike us, snails do not need to sleep for eight long hours in one take. Instead, they prefer taking short naps – about 7 naps spanning over 13 hours.

Snails are nocturnal creatures. They spend most of their daytime sleeping and will only come out of their shell to feast on algae at witching hours.

This is one of the reasons why your snail is not moving during the daytime.

Sometimes, snails can sleep even for 3 days. This might raise alarms for beginner snail keepers.

Reasons Behind Snail Not Moving

There could be several reasons behind a snail not moving. A snail won’t show movement if it is sleeping, hibernating, or is dead.

This is the most likely cause behind snails not moving. Their long sleep sessions can cause any aquarist to worry.

But let me tell you an interesting fact. Snails can sleep up to 3 years in the wild.

However, this phenomenon isn’t limited to a wild snail only.

Despite access to the correct water parameters, ample food, and a favorable climate, a captive snail can still go into a long hibernation.

Signs That Your Snail Is Sleeping

We wouldn’t be having this conversation if snails showed telltale signs like snoring or shutting their eyes while sleeping.

So, it might be tricky to know how snails sleep. But here are two signs that give it away:

Unlike most animals who go into hibernation only when the mercury drops, snails hibernate for peculiar reasons.

It may come as a surprise, but snails can also go into hibernation when there’s a shortage of food.

For instance, many aquarists report their snails going for a deep slumber when no algae are left for them to eat.

They will patiently wait in their sleep and let the algae bloom.

Usually, snails hibernate for 4 to 6 months. They will begin preparation for hibernation between October to November.

So, if your snails haven’t moved for weeks, it could be that their favorite food is out of stock, and consequently, they have resorted to hibernation.

And once they sense the algae blooming in their periphery, they will come out of hibernation and be on a feeding frenzy for hours.

So, How Do You Wake A Hibernating Snail?

I recommend letting these sleeping beauties wake up on their own.

But if you insist on waking them, you need to do the following:

Raise the temperature of their habitat gradually – not more than a couple of degrees per day. If you have a land snail, increase the air temperature; and for the aquatic snails, raise the water temperature.

Once they sense the temperature change, they will emerge from their shells.

And remember, they haven’t eaten for months. So place food nearby because they are entirely out of energy and are starving. This will help them bounce back to their usual selves.

Lastly, if your snail hasn’t come out of its shell even after raising the water temperature, your snail is probably dead.

Signs Of A Dead Snail

It is hard to tell whether a snail is dead or alive. But some pointers might help you deduce the case.

Here are some of them:

A Dead Snail Will Not Stick To The Aquarium Glass

When you pick up a dead snail, it will not stick to the aquarium glass. It will come off easily. If your snail curls up when touched, it means your snail is alive. Put it back immediately.

Another way to check if a snail is dead or alive is by looking at its trapdoor. A snail will shut its trapdoor when it is coiled inside its shell. But in a dead snail’s case, the trapdoor will always be open.

Did you know that snails can make doors inside their shells when hibernating? How cool is that?

This trapdoor is located at the edge of the snail’s operculum, a tough plate that acts as a door and protects its lower body from predators. It is attached to its foot.

A dead snail will give off a foul odor. This is among the apparent signs that your snail has bitten the dust.

But if you still have your doubts, keep the snail quarantined in a separate tank.

Light A Flashlight Inside The Shell

If the snail is young and has a thin shell, you can use a flashlight and check its heartbeat.

Is It Normal For Snails To Not Move?

Yes, it is normal for snails to not move in general. Usually, your slimy friends will sleep during the day and only feed at night. This is why you always find them inside their shell during the daytime.

Also, sleeping for a couple of days at one go is expected behavior, too. Snails tend to do this casually.

Furthermore, snails begin preparing for hibernation at the onset of November and will not come out till April.

This is a natural phenomenon observed in snails.

However, there is an equal chance that your snails won’t go into hibernation. Captive snails often remain active even in winter due to suitable temperatures and bounteous food supply.

How Do You Tell If A Snail Is Dying?

You can tell if a snail is dying by looking at the following signs:

Often, snails, especially the malnourished ones, are diagnosed with deep retraction syndrome.

A deep retraction syndrome is a common disease that affects a snail’s ability to retract normally into its shell. As a result, the affected snail will have trouble moving normally.

The snail’s body will become much tinier than its shell, making its anatomy widely disproportionate. As a result, it will have difficulty carrying its own shell around.

What Causes A Snail To Die?

There could be numerous causes behind a snail’s death. For example, it could be due to over cleanliness, weak genetics, parasites, aggressive tank mates, and bacterial or viral infection.

Yes, it might sound bizarre, but over-cleanliness can be a triggering factor for a snail’s death.

Most snails that we keep as captives are scavengers. They are omnivores and will feed on a varied diet, ranging from plants like hair algae to worms like detritus.

Furthermore, they also fatten on carrions.

Surprisingly, the bacteria that synthesize with the carcass to make carrions is healthy for snails.

But if you have a spotless tank, the necessary bacteria and microbes that process food for snails won’t be there anymore.

Consequently, snails will stop feeding if the tank has no biofilms. This can malnourish snails and cause them to die.

Like with every being, be it plants, animals, or humans, genetics has a vital role to play in a snail’s life, too. A genetic deformity can be the cause behind their untimely death.

We often see genetic kill-switch in nature, predominantly in plants. For example, some saplings tend to do well with the growth but can unexpectedly die without any reasonable explanation.

This can also happen with perfectly healthy snails. Sadly, there’s not much one can do about it.

Even though snails cannot survive in an overly clean habitat, they aren’t immune to extreme pollution as well.

Whenever snails seem weak, it could be that they are infected with Pseudomonas, a bacteria that is transmitted through polluted soil and water.

This bacteria can wipe out the entire snail population from the tank when infected.

So, this contradicts my own statement that I mentioned above and gives rise to the question, “how dirty is dirty enough for snails?”

So, How Do You Control This Infection?

First of all, when an infected snail is introduced to a new tank, the chances of spreading this infection to other residents are very high. This is because the bacteria’s incubation period is estimated to be about 6 to 8 weeks long.

This is why I always recommend my readers put their snails under quarantine for a minimum of two months.

Only then will your snail be completely rid of any external pathogen, and you can put the snail in the community tank.

Snails feed voraciously on algae, which is why they make a great addition to your cleaning crew.

However, we sometimes fail to realize that snails aren’t really anywhere near the top of the food chain.

Often the predators target snails and try to eat them.

Even though they may or may not succeed at it, they will still deal damage by toppling the snails on their backs.

Unfortunately, not all snails can get back on their feet, so they will die after struggling for a couple of days.

Staying in a toppled position can stress snails and result in a painful death.

So, pick your snail and keep it upright if you happen to see it in an upside-down state.

Some predators that you shouldn’t keep your snails with are:

Now that you know why snails die, let’s move unto what to do if your snail hops the stick.

What Can You Do With A Dead Snail?

Often, fish love snacking on dead snails. After your fishes are done eating, you can remove the shell or leave it as it is if it aesthetically pleases you.

If you want to get rid of the shell, put it in a zip lock bag and dispose of it safely.

Final Words: Why Is My Snail Not Moving?

Like I said earlier, waking a sleeping snail isn’t something I recommend. This is because sleep plays an essential role in a snail’s wellbeing.

Sleeping helps snails survive through the harshest of conditions, persevere through hibernation, or in some cases, heal when infected by bacteria.