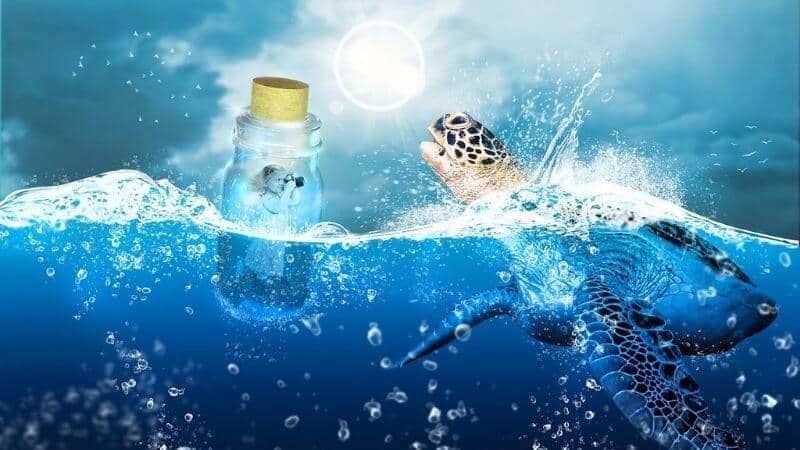 We presume that turtles are natural swimmers, and they will swim immediately once put in the water. But most of us don’t know they too need time to habituate with the surrounding before directly going inside the water. This is when you see them floating on the water and not diving as you imagined they would.

Every turtle does a little bit of floating when introduced in a new tank. However, it could be a sign of something fatal if this happens frequently, even after months.

Why Is My Turtle Floating?

Typically, every turtle floats for a while in a new tank to adjust to its habitat, but constant floating could indicate gastrointestinal gas build-up, respiratory illnesses, medicinal side effects, or dietary complications.

Now let’s have a detailed look at these potential causes.

First, let’s discuss the gas build-up in their stomach. Just like us, turtles too suffer from gastrointestinal problems. The wrong feeding style, improper diet, and poor timing of feeding lead to the building of gas in a turtle.

If your turtle is on medication, you should carefully study the several side effects of the medicine beforehand. The drugs you give to treat a specific disease could alter your turtle’s digestion process and cause gas build-up in its body. This leads to a bloated stomach bloating. And consequently, it will disrupt the turtle’s buoyancy, thereof causing the constant floating.

Though turtles aren’t picky about their diets, their food choice can sometimes lead to gas buildup. Yes, they are quite smart, but not sharp enough to know which food has high nutritional value with lesser side effects.

So what you can do is maintain a strict diet regime that provides them with all-around nutrition to thrive.

Turtles tend to prefer feeding on only a few specific foods which they are regularly eating. If you introduce new kinds of food, they might nibble for a bit and leave them to rot in the tank or consume whole. Both these probabilities—consuming everything and consuming only a portion— can cause bloating in the stomach and, of course, floating.

If you are introducing new food to your turtle, often check how much is being eaten at what rate. Often, turtles tend to nib a bit and save some for later. But if your turtle hasn’t eaten even after several hours, you need to know that your turtle’s not a fan of that particular food. Try new, different food, and check which ones it likes. Stick to few nutrition-enriched foods after that.

Sometimes your turtle’s body naturally stores gas and gets bloated. This natural phenomenon isn’t something that you should worry about. This will heal over time and seldom causes serious problems.

Most turtles are highly prone to respiratory diseases. It is one of the common reasons why turtles float instead of swimming in the water. Though turtles need to come repeatedly to the surface to breathe, they can stay underwater for a long time. However, when a turtle is ill, it cannot stay underwater for long and floats on the surface.

Respiratory problems in turtles can result from a poor diet, too. The lack of vitamin A in a turtle’s diet also means a lack of germ-fighting capability. The absence of means to fight the germs results in germ and fungus growth in their body system. As a result, this also leads to the floating of turtles in the tank.

Foods like leafy vegetables, sweet potatoes, and carrots are rich in vitamin A. These foods will help your turtle fight against many diseases and keep them healthy.

Most beginner owners do not know the importance of basking areas in a turtle’s tank. These basking areas are crucial for a turtle to keep its body warm. Unlike us, turtles are cold-blooded animals, and they need external factors to keep their bodies warm. That is why you see lots of turtles on the beach on National Geographic and Discovery channels on television.

You need to make an ideal basking place in the turtle’s tank, which is higher than the water surface. This will keep the area dry and help the turtle get the heat during winter. Right above the basking area, you need to keep appropriate UVA and UVB lights to increase the temperature.

Especially during the winter, the room temperature will drop considerably and the sun won’t be up for an extended period. Thus, you need to turn on these UV lights for hours to keep your turtle in its ideal environment.

The UV lights also help in the development of a baby turtle. They regulate the mood of the young turtle and increase their appetite, assisting it in food consumption and making their bones and shell strong.

However, along with the UV lights, you also need to ensure ample natural light for your pet. Turtles aren’t nocturnal – so you need to keep them in the areas where the morning sun rays fall on their shell.

Another reason turtles get respiratory diseases is because of the unhygienic environment in the tank. Turtles are naturally messy creatures. They pollute the water much faster than other aquatic animals. But this doesn’t mean that they aren’t affected by it. Contaminated water poses a high-risk threat to a turtle’s life.

Germs from the polluted water enter their lungs. This can cause them to be sick, and you will find them floating instead of diving in the water. They will show lesser energy levels and a lowered appetite. As a result, they become lethargic and show no interest in swimming at all.

Hence, you need to get a proper water filter that ensures all the gunk and impurities are removed. Here’s the one that I use in my turtle’s tank.

Also, you need to change the tank’s water regularly. You should timely measure the pH value of your water. Measuring water properties keeps a lot of troubles at bay. But above all, you will feel relieved that you are housing your turtle in a tank with proper water properties.

Here’s the kit that I use for measuring the pH value of my tank water.

How To Treat A Respiratory Infection In A Turtle?

If you feel your turtle is suffering from a respiratory infection, follow these steps to help your pet.

First, get a small tub or plastic box where you can keep your turtle separated from other tank mates. This small tub will be a lot easier for you to keep clean and maintain the temperature. Also, the separation means that the tank mates are safer from whatever your sick turtle is diagnosed with.

You need to pour water to the level that covers its shells but not the entire body. This helps your turtle breathe without having to swim up to get air.

And just like with us, the antibiotics for turtles also help them with respiratory infections. Here is one loved by many turtle parents.

If you detect RI early in your turtle, the treatment should be effective. But if you haven’t found any significant changes in your turtle’s health, you need to dry dock your turtle and start medication with a professional’s consultation.

Here’s a helpful video on how to treat Pneumonia in turtles:

Why Is My Turtle Floating Sideways?

Usually, turtles like to float in any direction. However, if the turtle is constantly swimming sideways, it could be due to gas filling in his stomach. Once it releases the gas, it will come back to its normal state. Other reasons could be because of illness in a turtle.

Sick turtles have a hard time finding the proper buoyancy while swimming. Furthermore, a turtle with pneumonia is seen floating sideways and cannot submerge itself in the water.

Why Is My Turtle Floating On Its Back?

A turtle floating on its back could be because it just fell while diving and couldn’t immediately fix its buoyancy. Or it could be the same reason like floating sideways – accumulation of gas inside its body or a respiratory infection.

No, dead turtles do not float immediately. It takes around 16 to 32 hours for gases to accumulate in a dead turtle’s body. Only after some time has passed, the turtle floats, rots and smells.

Gases formed inside a dead turtle can cause bloating of the stomach. Eventually, after several hours, enough gas forms inside the turtle’s body to make it afloat. A dead turtle often floats upside down.

Should You Worry About Your Turtle Floating?

Yes, you should worry about your turtle floating. The floating of turtles often means something is wrong. It could be due to the turtle suffering from respiratory disease, poor habitat or an imbalanced diet.

Signs And Symptoms Of A Turtle Floating

First, push the turtle inside the water and see whether it bobs out immediately or swims for a while before popping out.

Carefully check if your turtle shows all or a few of these signs. If yes, correct everything to make your tank a hospitable one for your turtle.

If the turtle isn’t showing any signs of improvement in a couple of days, even after you have corrected it, see a vet immediately.

How To Check If The Turtle Is Always Floating?

Many times, we often tend to misdiagnose problems in our turtle. A turtle’s regular swimming style could be mistaken for floating, thus, causing unnecessary worrying.

To check if your turtle is swimming normally or just floating, push your turtle under the water and observe. If the turtle wobbles right up after you push, the turtle has a floating problem. But, if it swims underwater before reaching the surface, then there’s nothing you should worry about.

Final Words On Why My Turtle Is Floating

Yes, turtle floating is expected because they float around for fun, but a prolonged floating period is a sign of distress in your turtle.

Check for gas accumulation and respiratory infection. The bloated stomach will most of the time come back to normal condition after the turtle passes out the accumulated gas.

However, if you see other signs like gasping for air, swollen eyes, and mucus out of the nasal and mouth area, it is a sign of respiratory infection, causing your turtle to float.

If you see your turtle float a lot lately, you need to take it to the vet.