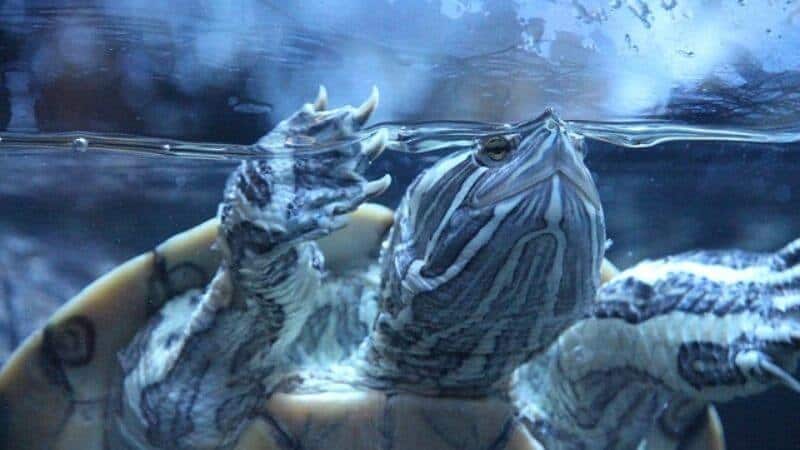 A turtle basking is a relaxing sight to witness. Though it might seem like a holiday thing for you, basking is their necessity. That’s because they get vitamin D, necessary to mobilize the production of calcium in their body. This is the reason they bask.

And if your turtle isn’t basking, you should definitely be alarmed. So, what could be the reasons behind a turtle not basking? Without further ado, let’s dissect them.

Why Is My Turtle Not Basking?

Reasons Why Your Turtle Isn’t Basking:

The first and foremost thing you need to do is check the placement of the basking area. If a basking area is on a steep place, it could be why turtles are not basking. Make sure the ramp upon which the turtle climbs isn’t steep or difficult.

If the ramp is too lofty, the turtle will avoid going to the basking platform. The ascending ramp shouldn’t be any more inclined than 30°.

Since the ascending ramps are close to the water, they are often slippery, even for turtles. You can put patches of plastics or rubbers to help with the grip. This way, your turtle can climb up the platform without falling. Also, make the plank wide enough to fit the ascending turtle.

Turtles come to the basking platform to warm and dry their body. But a wet platform will beat this purpose. So, make sure the platform is high enough from the water surface.

Here’s a basking platform I bought for my turtle:

It is super easy to access and also has ample space beneath for my turtle to retreat in.

Fluctuating Temperature In The Basking Area

A basking platform’s ideal temperature should range from 85 to 95 degrees Fahrenheit. Anywhere above that can make the area too hot for turtles. This usually happens due to the closer placement of the UV lights.

Turtles tend to bask for several hours every day. An overheated basking platform can cause the shell to dry quickly and eventually burn it. It can cause shell rots – prompting turtles to stop basking.

In some cases, the old UV lights might not be effective enough to provide enough heat for turtles. Why would a turtle bask if the water temperature is warmer than the basking place itself? This could also be a reason.

Your Turtle Could Be Anxious About The New Tank

Turtles are shy creatures. They are super aware of the surroundings in which they live. Their awareness will heighten even more when introduced to a new tank, making them reluctant to go to the basking platform.

So, you should take things at a slow pace. Let your turtle assimilate with its surroundings for a week. Do not expect a new turtle to bask immediately after being introduced to a new tank.

Eventually, the turtle will find its bearings in its new house and head towards the basking platform.

Disturbances In The Room

As shy as they can be, turtles are easily afraid too. Loud noises, rough handling, presence of other pets can also make them go into hiding. They will not come out until they feel entirely safe to do so. So, if you have a noisy house full of kids or pets, a new turtle will hesitate to bask.

You need to give your turtle time to calm down. Make sure the room you keep them in is quiet. Do not let kids handle new turtles. Also, it’s best not to handle a new turtle right after you bring it home. Wait at least a week before you handle it.

Moreover, make sure your kids wash their hands after handling a reptile. Turtles are known carriers of salmonella, a bacteria that can cause food-related illness.

Female turtles, when pregnant, display peculiar habits. They can stop eating and basking.

She will stop basking because she has to make the necessary preparations to lay her eggs. This maternal urge to protect her eggs will lead her to dig and make nests instead.

Captive pregnant turtles often scratch the glass in their attempt to get out and find a suitable spot to nest. As a result, frantic scratching and struggling to escape the tank are common among pregnant turtles.

So, you need to take her outdoors where she can dig and lay her eggs. This way, you will have fulfilled her maternal needs as a responsible turtle owner.

There are signs to look for when a turtle is pregnant:

Turtles are solitary animals. Just because they can live in groups doesn’t mean that they like each other. At best, they tolerate each other’s company.

So when there is more than one turtle inside a tank, chances that struggle for power-play will be there. If the aggressive one is dominant and claims the basking spot, the other will have to hide and wait for the basking turtle to come off the platform. This might be why you haven’t seen your other turtle basking in a while.

It will be even worse if the basking area is not big enough to accommodate two turtles at once.

Your Turtle Could Be Sick.

Also, an ill turtle will not bask. It will just hide or rest in a single place. You need to take the turtle to a vet immediately. Look for signs like mucus discharge, swollen eyes, redness around the neck, open-mouthed breathing, etc.

You Just Missed Him Basking

Some turtles tend to be evasive. They may not come out during the daytime or in your presence. They might only be basking when no one’s around, and you might have missed seeing it.

How To Encourage Your Turtle To Bask?

Put food in the basking area.

You should encourage your turtles to bask as this is crucial to keep them healthy. This is why you need to make your basking area more inviting. Make ascending easier by putting the climbing ramp at no more than 30° angle.

The steepness of the climbing ramp should be lower enough for even baby turtles to climb aboard.

Furthermore, the basking area should be large enough for more than one turtle to bask at once. This will prevent fight breakouts.

Do not keep the UV lights on for 24 hours a day. However, if you notice your turtles not basking during the day, it will be better to leave them on during the night.

You should know that too many UV rays can also cause hypercalcemia in turtles. If that happens, take it to a vet immediately. They usually prescribe Calcitonin, a super expensive drug that reverses high calcium levels.

I recently switched from the classic two-bulb setup to an all-purpose UV light that emits UVA and UVB rays.

The raving reviews on Amazon enticed me to buy this light, and I must say, I am thoroughly impressed with its performance.

Put Food In The Basking Area.

Although turtles need to be inside the water to swallow their food, you can still put food in the basking area to tempt them to come aboard. This will condition them to climb to the basking area in search of food.

You need not put chunks of veggies in the basking area. Instead, limit it to only special treats that your turtles like.

My turtle loves these sticks.

A healthy turtle will regularly bask to get its daily dose of UV rays. It will spend time on both land and water.

Suitable water parameters and a nutritious diet will help a turtle remain healthy. In addition to that, the vitamin D it gets from basking supplements healthy growth.

What Happens When A Turtle Doesn’t Bask?

When turtles don’t bask, vitamin D3 deficiency occurs. Vitamin D3 is important in metabolizing calcium, which is vital for bone growth and muscle functions. So, a turtle will suffer from a condition known as hypocalcemia, another word for calcium deficiency.

Symptoms of turtles suffering from hypocalcemia are:

Final Words On Why My Turtle Is Not Basking.

Basking for turtles is as important as eating nutritious food. Turtles are cold-blooded animals and cannot generate heat internally. Therefore, they need to bask in order to get heat from the UV rays.

Their dependency on the external environment is crucial for their survival. Thus, you need to prioritize making a suitable basking platform with proper UV lights.

There could be several reasons behind a turtle not basking. First, turtles often avoid basking when introduced to a new environment. They feel most vulnerable when on land, and their evolutionary trait compels them to hide till they feel safe.

A turtle not getting enough UV lights will suffer from hypocalcemia, a deficiency of calcium. Unfortunately, its treatment is too expensive. A single vial for hypocalcemia costs around 1300 dollars.

So, as doctors always say, prevention is better than cure. This is why you need the basking platform to be more inviting to encourage basking.