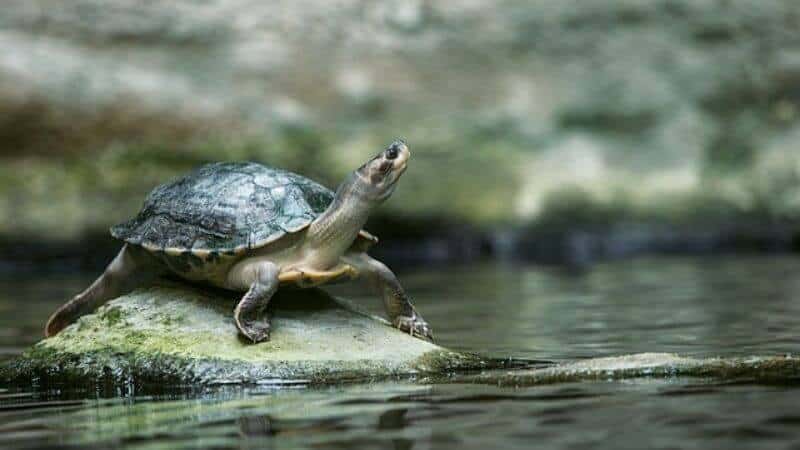 Unlike tortoises, turtles cannot fully retract their necks inside the carapace. It is because they simply do not have enough space inside their shell to accommodate their head. So, turtles are always seen with their necks out.

But in some instances, turtles do stretch their neck. Sometimes, it’s just out of habit, whereas it could be alarming in some cases.

So, let’s dive into why turtles stretch their necks.

Why Is My Turtle Stretching Its Neck?

Excessive stretching of the neck in turtles for a prolonged period is often caused by respiratory infection. This illness causes swelling in the neck and makes it hard to retract it. They also have difficulty breathing – thus, stretching their necks helps inhale air easily. This is why turtles stretch their neck.

Turtles also stretch their neck to stretch their body, just like other animals. It is noticeable during basking and before they dive into the water. This is their way of warming up before a swim, just like how Michael Phelps slaps his body.

Respiratory infection is a common disease in turtles. Poor water parameters and lack of vitamin A can cause this illness. Turtles suffering from this infection will have excess mucus in the mouth, nose, and eyes. As a result, they wheeze and have difficulty breathing. The infected turtle will stretch its neck to inhale more air to breathe.

Your Turtle Could Be Choking.

Turtles do not have teeth to bite or chew their food. This is why they take their food inside the water to swallow. Water helps them gulp down the food with ease. But not all turtles can swallow food whole.

Sometimes, turtles can choke on their food. Now and then, turtles tend to swallow the gravels inside the tank, which too could cause choking. And when this happens, it will limit the amount of air they can intake and cause them to stretch their neck.

Symptoms like gasping, frantic swimming, open-mouthed breathing, etc., are seen. Unfortunately, there’s not much you can do about it. Take your turtle to a vet immediately.

Apart from the severe hazards detailed above, there are other normal or natural reasons behind turtles stretching their necks.

Turtles Stretch Their Necks During Hunting.

Fossil evidence from the prehistoric turtles has revealed that turtle necks’ tensility wasn’t just for hiding their head from predators. This flexibility actually was their tool to catch prey with their mouth.

Although turtles are slow, their flexible necks allow them to pounce on prey nearby. They will retract their neck and shoot off while catching prey.

Turtles Stretch Their Necks While Basking.

Turtles are cold-blooded reptiles. This means that they cannot generate internal heat to keep their body at an optimum temperature like us. This is why they have to bask in the sun to get an abundant amount of UV rays. UV rays keep turtles healthy and avoid diseases like a metabolic bone disease.

Turtles in the wild do not have the luxury like captive turtles. During winter, they can only bask for a limited amount of time. So, they will stretch out their body to increase body surface area to intake as many UV rays as possible.

Captive turtles also stretch their necks while basking. So, perhaps, the evolutionary trait is why they stretch even when they are getting enough heat easily inside the tank.

Turtles Stretch Just For The Sake Of Stretching.

Turtles need to stretch their neck for everyday activities. Unlike most other animals, their hands or legs don’t help them grasp their food. A turtle’s neck is an all-purpose part of its body used for hunting, swimming, and eating.

So, turtles stretch their necks just like every other animal, which is to give it rest. The overwhelming use of their neck is the reason behind their astounding ability to catch prey despite being one of the slowest creatures on the planet.

Evolution of Neck In Turtles

Scientists had claimed that there was a time when the omnivore and herbivore turtles with shorter necks were about to go extinct due to their inability to catch food. And this is why our friends, turtles, evolved to have longer necks.

The strength of these neck muscles in turtles overcompensates for their rigid spines and inability to use back muscles like other animals. This is the scientific reason behind longer necks in turtles.

How Long Can A Turtle’s Neck Get?

Sea turtles have a flat and streamlined shell that has evolved over millennia to help them swim at higher speed for hunting and covering thousands of miles for breeding. Unfortunately, their streamlined shells do not have enough space for their heads and necks to be retracted like other turtles. This is why sea turtles cannot retract their necks.

Final Words On Why Is My Turtle Stretching Neck

Stretching is an everyday activity done by both animals and humans to maintain muscle mobility. It is the same in turtles too. However, excessive stretching of the neck for more prolonged periods does seem alarming. The probable cause behind this could be a respiratory infection.