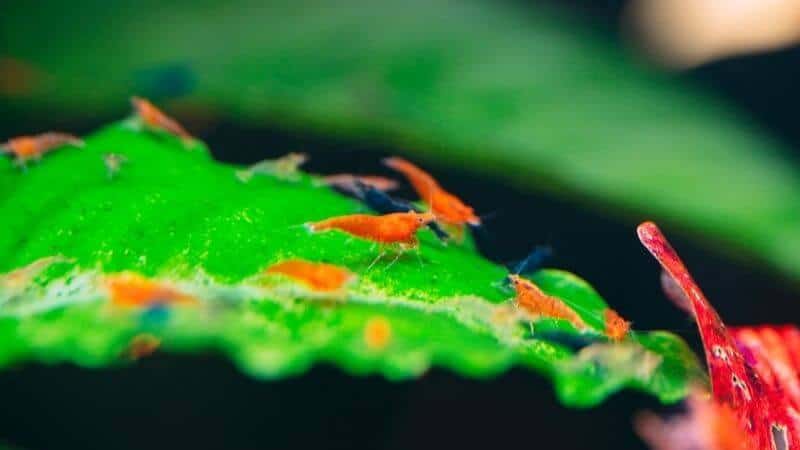 The Jury is out on this one. Even though Amano shrimp is a non-aggressive creature, scarcity can bring out aggression in them. This rarely happens as they feed on whatever they can find in the tank. So if kept together in the same tank, will Amano shrimp eat cherry shrimp?

Let’s get into more discussion.

Not necessarily the lack of food, but the deficit in a meaty diet is the reason Amano shrimp will eat cherry shrimp. Cherry shrimps are small and are easy to prey upon by your Amano when they need to eat. But it doesn’t mean that cherry shrimp are their natural diet, and they will feed on them every time.

Why Is My Amano Shrimp Eating Cherry Shrimp?

Cherry shrimps are much smaller when compared to Amano shrimp. Your Amano might think of your cherry as a meaty source of diet and prey on them. There are several reasons your Amano is eating cherry shrimp.

Sometimes, you might have found that even though you are feeding them enough, they feed on other shrimp. Maybe the other shrimp might have died because of different reasons, and Amano is there for just cleaning. Not only Amano but also the other shrimps also eat their own breed if found dead in the habitat. This is just their nature to eat whatever’s about to decay and is dead.

However, if you notice your Amano shrimp going after a live cherry shrimp, there could be other underlying reasons.

Let me explain these reasons.

Amano shrimps feed on algae, but if there’s a lack of plants that help make algae in a tank, they will need to find other food sources to survive on. If you have been away and weren’t able to feed regularly, the Amano will also be forced to feed on your cherry shrimp.

So always feed your Amano in proper amount so they won’t have to feed on other things except its regular diet. This way, you can keep your cherry shrimp safe from your Amano.

Though many will mostly rely on algae, they sometimes will need meaty products to satiate their cravings. They need a balanced diet to thrive. And when they miss out on the protein diet like meats, they will prey upon cherry shrimp and other shrimps.

Amano shrimps are omnivorous invertebrates, so you need to feed both plants and meat diets as a balanced diet. Include frozen foods like bloodworms and brine shrimps to fulfill their protein source.

Smaller tanks cause overpopulation in a tank. If you are housing too many inhabitants in a small tank, then there’s a chance that your cherry shrimp and Amano shrimp are to cross their path often. Usually, your Amano shrimp won’t do any harm to other shrimps. However, you need to know that both these shrimps diet are almost the same. And when you put feed for them, it is most likely that both of them will try to feed on them at once.

Amano shrimp are known for their frenzy eating style and can sometimes have a go at your cherry shrimp if the feeding spot for both of them is the same. So, get a bigger tank where you can feed individually to your shrimps.

Amano Shrimps Can Be A Bully.

However, Amano shrimp can bully smaller shrimps and try to snatch the feed from other shrimp’s mouth. Like I said, if the group of Amano is larger than other shrimps, they will even try to attack fishes. So you need to balance the number of Amano shrimps in proportionate to other inhabitants.

Out Of Pure Instinct/ Nature’s Way

You need to know that it is nature’s way of balancing the food chain. Bigger carnivores prey upon smaller ones to fulfill their diet, which should be the case in your Amano shrimp. Even though they are adequately fed, they might have a go for shrimp dishes on their menu.

The lack of food and craving for a protein-filled diet can make your Amano shrimp eat cherry shrimp fry. Amano shrimp will devour smaller creatures if they are in scarce of food sources in the tank. Otherwise, they will mostly graze on algae and moss in the tank.

The fry’s an even better choice for them to prey upon, as they are always in more significant numbers and easy to hunt by the Amano. If you keep Amano and cherry shrimp fry, you need to protect your fry from Amano in the tank. Get a separate tank for growing your fry.

Will Amano Shrimp Eat Other Shrimps?

Yes, Amano shrimp can eat cherry shrimp, but it isn’t their regular food choice to feed on. It depends upon various factors, which result in your Amano shrimp eating cherry shrimp. You need to ask yourself questions like, is there scarcity in the tank? Is your tank getting overpopulated?

Or it could be nature’s way of might is right with relation to small fish being devoured by the big ones.