Will Ghost Shrimp Eat Fish? Are They Scavengers Or Predators? 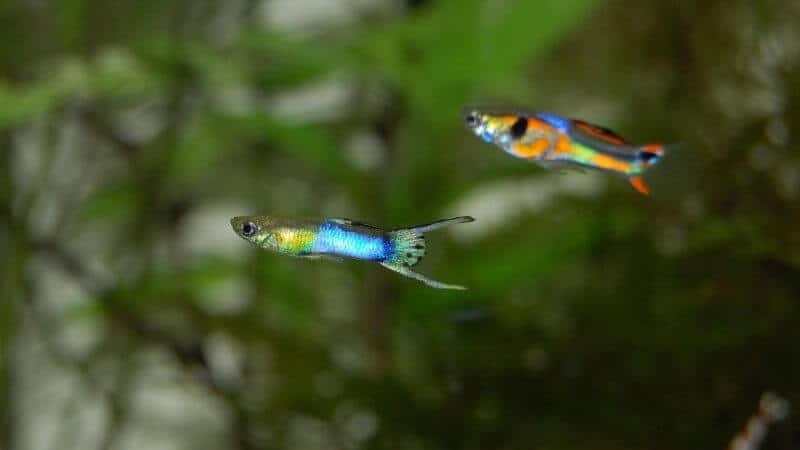 With some exceptions, ghost shrimps are usually raised to be fed as live, nutritious snacks for aquarium fish. The survival rate of ghost shrimps in a community tank is meager. But will ghost shrimp eat fish too? Will the tables turn?

Ghost shrimps are opportunistic scavengers that’ll spend most of the time eating whatever’s fallen to the bottom. As larvae, they have little choice. But these omnivore creatures can eat live fish like guppies, bettas, and even angelfish.

While researching, I dug through various forums and came across several owners who claimed that ghost shrimps had devoured their live fish on multiple occasions.

However, others stated that their ghost shrimps have happily accommodated in community tanks with no one getting eaten or injured.

Ghost shrimps are tiny invertebrates. At most, they’ll reach a maximum size of 2 inches.

But they can take down fish that several sizes bigger than them—for instance, their arch-nemesis in a community tank: angelfish.

So, how on earth do ghost shrimps pull that off? Let’s find out.

How Can Ghost Shrimp Eat Fish?

If we bring fish and ghost shrimp head-to-head, the latter is more likely to be eaten. However, they have certain prowess to give fish a tough competition. Ghost shrimps usually attack fish when they’re sleeping. As brilliant swimmers, they also pick on slow-moving fish like betta and angelfish.

Ghost shrimps will usually go after the neck or stomach first, as these parts are more sensitive to attacks. While most fish will wake up and defend themselves, slow-moving species can get eaten or killed.

If you’ve ghost shrimps, you may have noticed that they’re always on the move—scrounging the bottom for any edible bit they can find. Thus, if you have ghost shrimps with predatory instincts, they can easily take on slow swimmers like angelfish and betta.

Ghost shrimps can propel themselves backward by flexing their abdomen muscles and tail at a lightning-fast speed.

Several fish keepers on several forums have reported dead or injured angelfish and bettas in the tank. And they’ve also clarified that those fish weren’t dead before to rule out chances of simple scavenging.

Usually, scavengers go straight for the eye when feeding on a dead body. But if your notice your dead, injured, or half-eaten fish has injuries in the neck or abdomen area, it’s most likely a case of predation.

Many also shared that their betta had torn and injured fins.

Ghost shrimps don’t have teeth. But they have some sharp organs around the mouth, like the antennule, antennular peduncle, and rostrum, which help them prey on a smaller fish species.

And although none of these organs directly serve the purpose of preying or attacking, they definitely can inflict harm on delicate parts. For instance, the rostrum is hard and strong enough to tear through fins easily.

Many find it unusual, but fish keepers often use ghost shrimps to control the tank’s fry population. Ghost shrimps love to snack on fish fry. So, if you’re trying to raise your fry, you must keep them in separate tanks.

The little ones don’t have many options to choose from because they have a tiny mouth. On top of that, they’re often carried away across the aquarium due to water current. Thus, they’ll eat whatever they find and can fit in their mouths.

Yes, ghost shrimps can eat snails, snail juveniles, and snail eggs too. Usually, the eggs and juveniles are too small—making it an effortless task for ghost shrimps. Besides that, consuming slow-moving snails is no challenge for these brilliant swimmers.

We don’t rule out the possibility of a ghost shrimp eating fish, but often, the guilty shrimp turns out to be an imposter. Ghost shrimps are sold as a random collection of different species. So the shrimp you’ve brought home can be another prawn species with predatory instincts.

So, always get your ghost shrimps from a reliable store that sells them separately.

Ghost shrimps are opportunistic feeders that primarily scavenge. They love to feed on dead and decaying bits that fall to the tank’s base, whether it’s plant, fish, algae, or even fish poop.

And while ghost shrimps scrounge for most parts, we cannot ignore the possibility of them attacking and eating live fish. Several fish parents across dozens of forums have reported that their ghost shrimps have injured and consumed fish. Betta, angelfish, guppies, mollies—no one was spared.