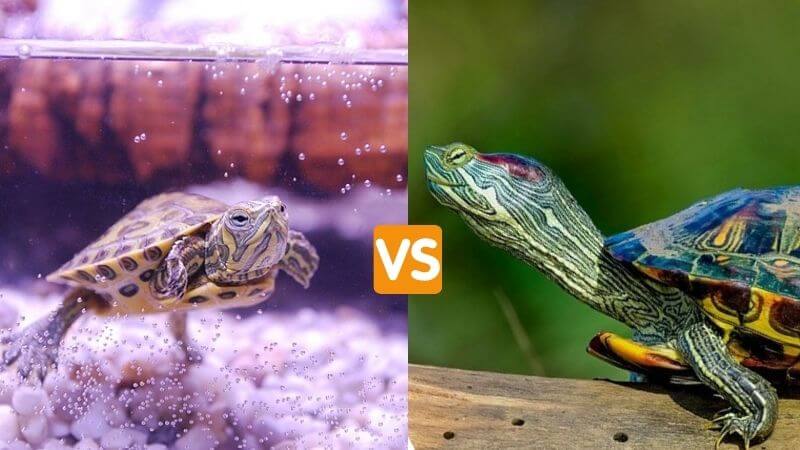 Inspiration for the popular comic, Teenage Mutant Ninja Turtles, slider turtles are a cult favorite. Their ability to slide off rocks and logs and dive into the water is why they were christened with this name.

We can find many species in the slider segment. The most celebrated ones are the red-eared slider, yellow-bellied slider, and Cumberland slider.

However, we will exclude the Cumberland sliders from today’s discussion.

So, without further ado, let me shed some light on the similarities and differences between the yellow-bellied slider and red-eared slider turtles.

The major difference between these two pets is their color. Yellow-bellied sliders have black and yellow markings on their carapace and bright yellow plastron. On the other hand, the red-eared sliders can be red, yellow, green, light blue, brown, and black.

In addition, red-eared sliders have a distinct red or maroon stripe behind their eyes, which gives them their name.

Yellow-bellied sliders have black and yellow markings on their body. The carapace (top shell) is dark brownish-green with orange and black wavy lines, and the plastron (lower shell) is the signature bright yellow. And there are 4 dark spots on each side of the plastron.

However, as they get older, the shells become darker, especially at the top.

The color of the upper shell in some red-eared sliders is dark brown, whereas some happen to be olive. They have a yellow plastron and have the famous distinct red or maroon colored markings behind each eye. On top of that, there are multiple black spots on its scutes.

Their shell is oval and has slight serrations around the edges. A keel runs through the middle of the shell. They have yellow lines on their carapace, which fade away with age.

They have a long life expectancy of 50 to 70 years.

They are native to Tennessee, the Mississippi River, and the southeast regions of North America. They are found in diverse habitats like slow-current rivers, swamps, marshes, wetlands, ponds, and lakes.

They are native to the southern United States and Northern Mexico. They are found in natural freshwater habitats and man-made habitats like ditches, canals, and ponds.

Adult males can reach anywhere between 5 to 9 inches in length, whereas females clock in at 8 to 13 inches.

Adult males can reach between 7 to 9 inches in length, and females can be as big as 10 to 12 inches.

There aren’t many drastic differences between these two turtles. This is because both of them fall under the same genus, i.e., Trachemys.

Appearance-wise, both look similar. Both the turtles also share the same physical attributes and habitats.

So, let’s check out the similarities between yellow-bellied sliders and red-eared sliders.

Both Are Similar In Appearance

Apart from the red spot on the side of the red-eared slider’s eye, both of these turtles look almost the same. This is because both the turtles have olive-colored shells with yellow plastrons.

It is even harder to tell one from another in baby turtles.

Both pond turtles live in the same habitats. They can be found in creeks, slow-moving water bodies like lakes and ponds.

The tank size requirement is also identical. The rule of thumb is 10 gallons for every inch.

So, for example, if you have a 4-inch long turtle, you will need a 40-gallon tank.

Both these turtles are omnivores. They feed on invertebrates, water insects, crayfish, crustaceans, and worms.

However, they lean more towards herbivorous diets like algae, leaves, aquatic plants, fruits, and seeds as they mature.

Both Of Them Require Same Water Parameters

Both are freshwater turtles. Therefore, keep them in dechlorinated water with zero ammonia, nitrate, and nitrite levels.

Also, make sure you maintain the right temperature – 74 to 78 degrees Fahrenheit.

Both Turtles Are Hardy

Both slider turtles are easy to rear. They have a strong immunity to fight against diseases. They do not get sick often until there’s something seriously wrong with their diet and habitat.

They can even thrive in sub-optimal conditions in a low-maintenance environment.

Both Have Similar Temperament

These turtles have a mild temperament. They can be shy at first but will be comfortable if you handle them gently.

They can get aggressive on land as they feel vulnerable when they aren’t in the water. Also, I have found them getting snarly during their feeding time.

These turtles can get aggressive towards their tankmates. However, temperament also depends upon the size of the tank. Pond turtles can be territorial, so you need to put them in a bigger tank.

Yellow-Bellied Slider Vs. Red-Eared Slider: Which Is Suitable For New Owners?

The law in most of the US states has banned the importing, buying, and selling of red-eared slider turtles below 4 inches. Also, if you feel like disowning or releasing them into the wild, you can’t do so as this is against the law.

So, it is better to raise yellow-bellied sliders, which aren’t listed as invasive species by the IUCN.

With yellow-bellied sliders, you wouldn’t have to go through the legal hassle if you are ever caught releasing them into the wild.

On the flip side, the same cannot be said for releasing red-eared sliders.

Both these turtles grow big, and a medium-sized tank won’t be able to accommodate them. So, put them either in a stock tank or make an outdoor pond.

There are also options for releasing grown turtles into the wild. But, as I mentioned before, releasing red-eared sliders in the wild is illegal.

So, if you do not want to take custody of your red-eared sliders, call the animal center and ask for their help.

Nowadays, many pet owners give their red-eared sliders to animal centers. And unfortunately, this is why these animal centers might be hesitant to address your problem.

So, you need to plan ahead and ask yourself whether you are in it for the long haul. If the answer is yes, congratulations.

And if the answer is no, you can always keep pet fish that are much easier to upkeep.

Both yellow-bellied sliders and red-eared sliders are beginner-friendly. They are considered social animals in the turtle-keeping community.

So, temperament-wise, both the turtles can get quickly accustomed to handling.

Can Yellow-Bellied Turtles And Red-Eared Slider Turtles Live Together?

Both these turtles are solitary animals and can get territorial when they have to share the same domain.

But a larger tank can give them enough area to cohabitate without conflict.

I have found my yellow-bellied turtles stacking on red-eared sliders, too.

Here’s how you keep them together:

Get A Bigger Tank.

Incomprehensible to us, but aquatic pets are fussy about their territory.

Both these turtles can get aggressive when one encroaches on another’s territory. So, you should get a large tank to house them both.

This 150-gallon tank from SC Aquariums is a perfect choice for keeping pond turtles inside.

This tank is lengthier horizontally than vertically, which is precisely what pond turtles need.

It also has the perfect height for both red-eared slider and yellow-bellied turtles.

Get A Tank Divider When Things Escalate.

It is uncertain to claim that a large tank will solve all your problems when keeping yellow-bellied and red-eared sliders together. After all, it also depends upon the turtles’ temperaments and their sizes.

Suppose one turtle is relatively smaller than another. In that case, the bigger one will bully and harass the smaller turtle.

So, to prevent this from happening, you need a tank divider.

Here’s a tank divider from Toyuto, which does what is required of it. And it’s transparent, too!

This helps you retain your tank’s aesthetics even after putting a divider.

Consider The Gender Before Putting Them Together.

Male pond sliders do not get along that easily. They fight over almost anything. The tension heightens when there are female turtles in the tank.

Also, do not think of putting male and female turtles together. The male will constantly bicker and harass the female turtles. This usually happens during mating season.

And as the captive turtles live in favorable temperatures all year round, the environment is conducive for them to be sexually active all the time.

Worst-case scenario, what if they get raunchy for an entire year?

Had they been in the wild, the females would have enough area to run or swim to avoid male turtles’ pursuit. But, that isn’t possible in an indoor tank.

So, you shouldn’t keep male and female turtles together.

Do Not Put Wild Turtle And Captive Turtle Together In The Same Habitat.

Wild turtles are resilient, whereas turtles raised in captivity are usually docile. Furthermore, you cannot discipline a wild turtle to comply with your captive ones.

Yes, yellow-bellied sliders and red-eared sliders often mate when kept together in the same habitat. This is because both of them are subspecies of the same species, known as pond sliders.

In the wild, too, they are found mating and producing hybrid offspring.

So, there’s a high possibility that the red-eared slider or yellow-bellied slider turtles you own could be descendants of the intergrades.

These intergrades have an uncanny resemblance to either of the turtles – thus, you could have a hybrid turtle, and you might not know it.

As both these turtles are classified under pond turtles, they have more similarities than differences. They share many similarities; habitat, diet regime, temperament, etc.

They can even mate and produce healthy offspring. You can find these hybrid offspring available for sale in pet shops.

Both the red-eared sliders and yellow-bellied sliders are hardy reptiles and require minimum to moderate care. This is why they have become the two most popular pets among turtle lovers.